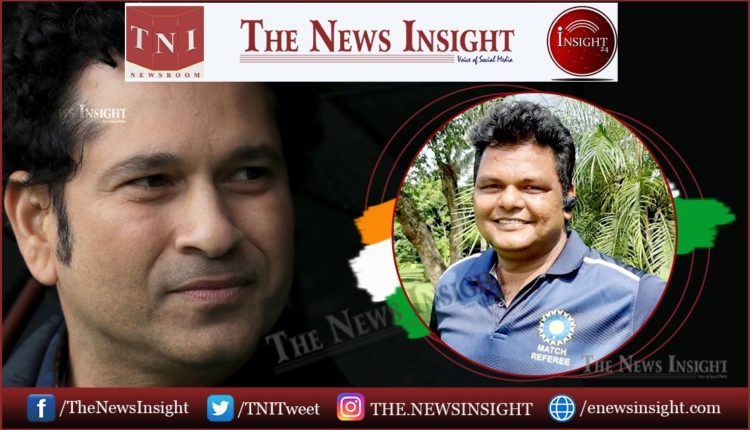 TNI Bureau: Very few might have known that Prasanta Mohapatra, former Captain of Odisha Ranji Trophy Cricket Team, who lost his life just day before yesterday on May 19, battling against post COVID complications, had a special connection with Mumbai and most importantly he was the only Odia student of legendary Sachin Tendulkar’s cricket Guru Ramakant Achrekar.

Ramakant Achrekar was famous for coaching young cricketers at Shivaji Park in Dadar, Mumbai, most notably Sachin Tendulkar. He had also been a selector for the Mumbai Cricket Team. When Prasanta was practising nets there, Achrekar watching him and got impressed by his talent. Then he took him in his academy. Achrekar did not charge a rupee from Prasanta for coaching him.

The sudden demise of Prasanta had been a great shock for the batting maestro Sachin Tendulkar as he knew the Odia cricketer well. Sachin expressed his anguish and said that Prasanta was one of those familiar faces for him. Whenever they were in Cuttack or Bhubaneswar, Prasanta would come and offer them home-made food.

Notably, there is a Ganesh statue in the maestro’s home, which was sculptured by Raghunath Mohapatra, Prasanta’s father.

Prasanta was popularly known as “Munna” and had played several matches for Odisha. He had scored 2,196 runs with an average of just above 30 with five hundreds and 11 fifties and a highest score of 157 not out. Since 2010, he had been serving as a Match Referee for Board of Control for Cricket in India (BCCI). Prasanta also played with the great Indian Cricketer like Rahul Dravid and Anil Kumble.

Prasanta’s father Raghunath Mohapatra who was a celebrated sculptor, and a Rajya Sabha MP and a Padma Vibhushan awardee had passed away due to COVID-19 at AIIMS, Bhubaneswar on May 9. Prasanta was his second son and died at the age of 48 suffering from same cause, fighting with the deadly virus.

Again, his eldest son Jasobanta Mohapatra, who was carrying the family’s lineage in stone carving also died of COVID-19 on Thursday. He was 52. Raghunath Mohapatra’s youngest son died of a road mishap 5 years ago. The pain of loss is really irreparable and unbearable for the family.