The Sarmat - dubbed as Satan 2 by Western analysts - is among Russia’s next-generation missiles that Putin has referred to as “invincible". 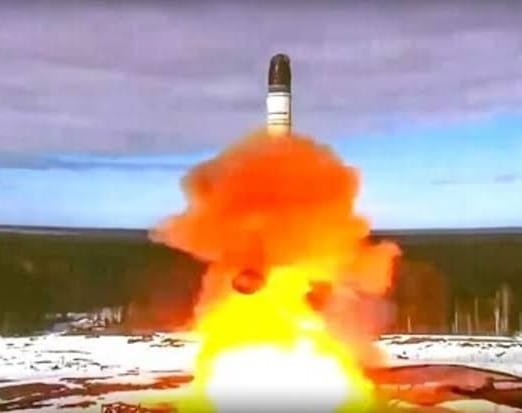 Insight Bureau: Russian President Vladimir Putin announced on Wednesday that Russia has successfully test-launched the Sarmat intercontinental ballistic missile, stating the weapon has no peers in the world and is capable of carrying nuclear charges that will make Moscow’s enemies “think twice” before threatening the country’s security.

The Sarmat – dubbed as Satan 2 by Western analysts – is among Russia’s next-generation missiles that Putin has referred to as “invincible”.

Weighing more than 200 tonnes, the Sarmat is a heavy class liquid-propellant rocket with the longest range of destruction of targets in the world and is capable of deploying with 10 or more warheads on each missile, both through the North and South Poles.

Putin, on Wednesday, congratulated the army on the successful launch of the Sarmat intercontinental ballistic missile. He added, “This truly unique weapon will strengthen the combat potential of our armed forces, reliably ensure the security of Russia from external threats and make those who, in the heat of aggressive rhetoric, try to threaten our country, think twice.”

The Sarmat has been under development for years. So its test-launch is not a surprise for the West, but it comes at a time of heightened geopolitical tension between Russia and the West over Moscow’s invasion Ukraine.

Russia’s defence ministry, in a statement, said the test successfully took place at the Plesetsk cosmodrome in northern Russia.

Know Why Jignesh Mevani was arrested by Assam Police