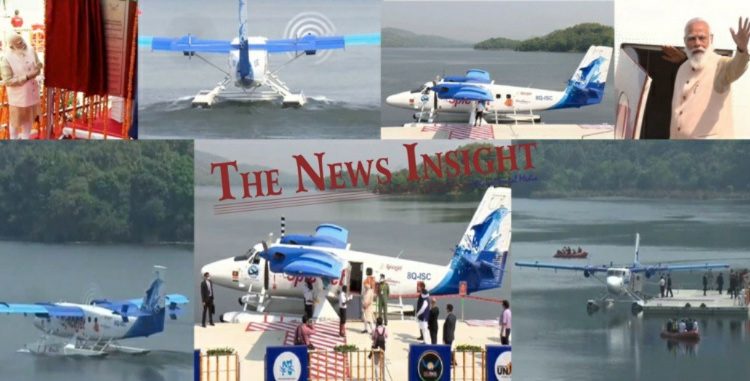 TNI Bureau: PM Narendra Modi has launched the first official Seaplane service in India under the UDAN scheme. The Prime Minister also took the maiden flight from the Statue of Unity in Kevadia to Sabarmati Riverfront in Ahmedabad. It was long overdue in the country.

➡️ The first commercial seaplane service in India had begun in Andaman and Nicobar islands on January 23, 2011. The Seaplane operates between Port Blair and Havelock Island.

➡️ In 2013, a commercial Seaplane was launched at Kollam in Kerala with the help of Kerala Tourism Infrastructure Ltd. However, commercial operations could not start due to the opposition from the local fishing community backed by Left parties.

➡️ Then Andhra Pradesh CM N Chandrababu Naidu took a test flight of seaplane in river Krishna.on December 13, 2017. The test flight was carried out at Krishna River’s Punnami Ghat in Vijayawada. However, that project could not be materialised.

➡️ Under the UDAN scheme, the Seaplane service will be operated in various parts of the country and the first one was launched in Gujarat today by PM Narendra Modi.

Things to know about Seaplane Services in Gujarat:

👉 The flight was operated by SpiceJet’s fully-owned subsidiary, Spice Shuttle.

👉 SpiceJet will operate two daily flights on the Ahmedabad-Kevadia route with effect from October 31.

👉 Fare would be Rs. 1500 under the UDAN scheme. Tickets could be bought on spiceshuttle.com.

👉 A 15-seater Twin Otter 300 aircraft is being used for these flights.

👉 SpiceJet has procured 18 Seaplane routes under the UDAN which includes – Ahmedabad-Kevadia (Sabarmati River Front to Statue of Unity, Sardar Sarovar), Agatti-Minicoy, Agatti-Kavaratti among others.