Earlier, he was found wandering on the pavement by the social workers of Udavum Karangal at Maraimalai Nagar  Bypass Road. 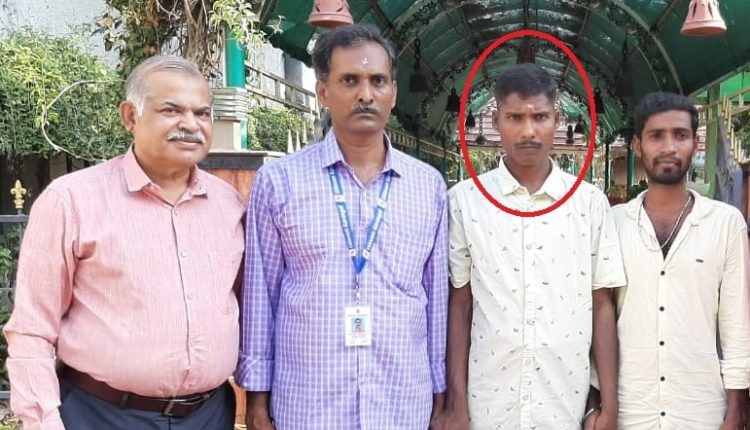 Insight Bureau: Binod Kumar Sahu, a 35 year old demented man  from Goudabahali village, Jajpur, Odisha was rescued on April 21, 2022 from the Maraimalai Nagar bypass and now has been reconciled with family on April 26, 2022 after being missing for 6 months.

Social workers of Udavum Karangal Jacob and Mohan while travelling by an Ambulance in Maraimalai Nagar  Bypass Road saw Binod walking at a fast pace on the pavement.  He was wearing around 10 shirts at a time and was very poor in self care.  On seeing this, Social worker, Mr. Jacob approached the person to know if he was a mentally unstable person.  On conversing with him  he was found not to be clear in speaking, was talking on his own and prima facie suspected him to be a mentally disturbed person.  He asked if he would come to Udavum Karangal’s Home for which he immediately agreed. He was brought to our Home Shanthivanam Rehabilitation Centre at Thiruverkadu on 21st  April 2022. After admitting in  our Home he was very co-operative, was given sumptuous food and new clothes to wear.

He was referred to a Psychiatrist and daily interaction session with the patient by Srinivasa Rao, Social Worker helped us get more information about his family.

The constant interaction of the Psychiatrist helped Binod not only to be calm & cooperative but also to regain his lost memory. Gradually, he was able to trace his native address.

He gradually recalled his memory & mentioned that his fathers name was Gangadhar Sahu was a vegetable vendor & his mother, Satyabhama Sahu had bid adeu to this world 2 years back. He also recalled how he took a bicycle to go to the market but instead he reached the railway station, boarded a train & ended up in Chennai. He loitered in Chennai for the last 6 months until he was rescued by Udavum Karangal. 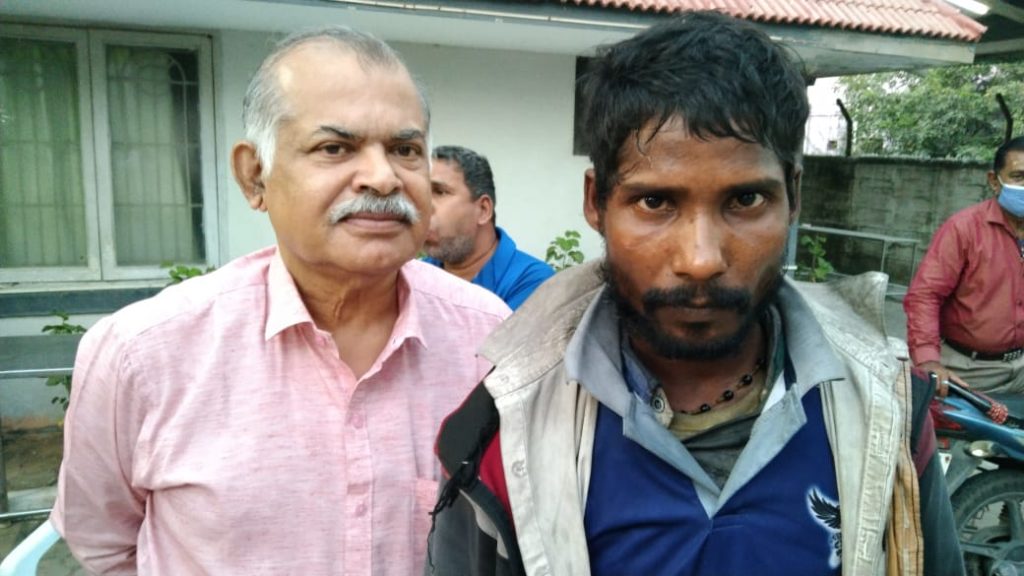 On of the social worker, Srinivas Rao managed to trace  the contact of  Harshvardhan from Jajpur District Reporter of a daily Newspaper. He then shared the information given by Binod & requested Harshvardhan to cooperate & help them to find Binod’s family. Binod had 3 siblings, Vikram Sahu, Rupa and Gelli.

On hearing the pleasant news about Binod, the happiness of his family member knew no bounds & everyone was eagerly waiting for Binod to come home. Unfortunately, Vikram, Binod’s younger brother faced challenges to Reach Chennai due to unforeseen circumstances.  Without wasting time, he contacted his cousin, Kailash who was working at Puducherry. He upon hearing this news immediately rushed to  Udavum Karangal Thiruverkadu on April 26, 2022 and received Binod Kumar.  He further disclosed that  Binod was missing for almost 6 months and they were all frantically searching for him , but did not give a police complaint.  He said that Binod was a known psychiatric patient for the last 10 years and he was missing for the 2nd time.  The 1st time he went missing and he himself came back to his house after 45 days.

Kailash expressed extreme happiness and thanked both Vidyaakar Founder Udavum Karangal for the act of kindness in tracing out his family having rescued his brother and safely handed over him to his family.  He was given psychiatric counseling and also free medicines for a month. Binod reached his village April 30,  2022 and finally reunited with his family. 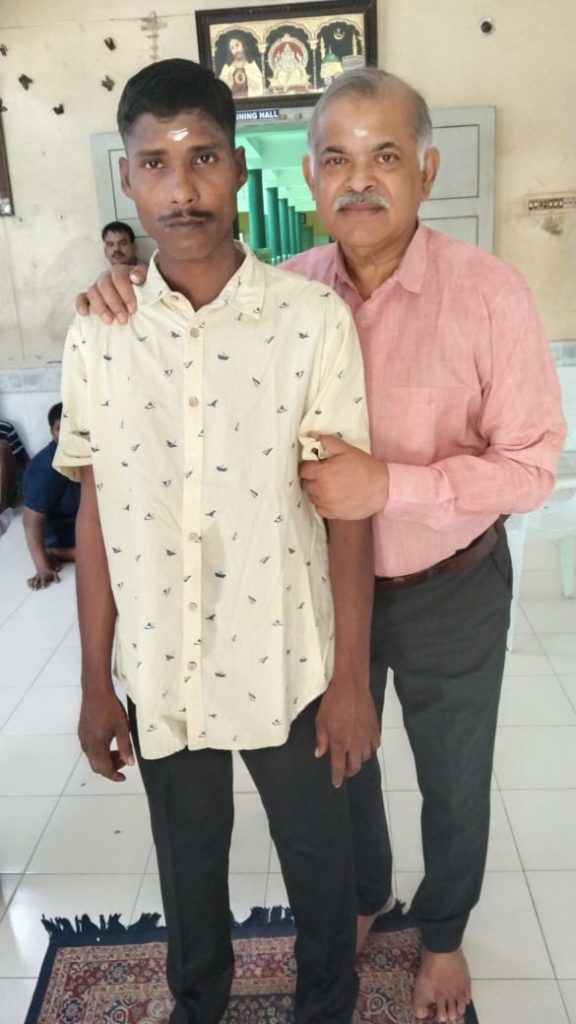 Similarly, another incident which had a happy ending is of Reshmi, a 22 year old mentally challenged girl from Baghera Village, Nayagarh district. Reshmi was mere 19 years old when this unfortunate incident took place. Falling in love at a very tender age raised nothing but opposition from her family as well as the villagers forcing her to attempt suicide. Reluctant to the torments by her family, Reshmi eloped with her lover to Agra. The couple earned their daily bread through street vending. Within a year, she delivered a child.  Gradually, the poverty stricken family faced difficulties in making both ends meet. Her husband became a drunkard and started abusing her. Considering her as a nuisance, her husband drove her out of the house along with the child.

With nowhere to go, clueless Reshmi along with her child boarded a train  to an unknown destination. At night when she napped, her only child was stolen from her. She could do nothing for her lost child.  With an unstable mind, Reshmi was found wandering alone on Thacchoor road. A Samaritan informed an all women’s police station & Reshmi was  was taken under their custody on 22nd February 2017. Receiving information, social workers of Udavum Karangal  rushed to the police station and enquired about her. Language becoming a challenge, they somehow managed to their home for further treatment. A few days later they took the help of a language interpreter but traumatic Reshmi was affirmative towards them.

She was under psychiatric treatment  and frequent counseling.  After repeated talks, she started revealing her story of yesteryears  and also her name first as Reshmi.

Reshmi ,aged 22, was referred by an Inspector of Police, Arani (Women police), Thiruvannamalai district, to Udavum Karangal, Chennal.  She was found wandering alone on Thacchoor road, by a person named Mr. Ramesh who informed the all women’s police station and was taken under their custody on 22nd February 2017. After getting information from the police Social Workers of Udavum Karangal  rushed to the police station and enquired about her. In spite of having a Hindi interpreter she spoke unintelligibly & was not able to understand anything she was saying. As per the request of the Police we brought her to our home for further care & management.

After 4 years of proper treatment & accommodation, she recalled & rejoiced the memories of how much she missed farming & cultivating with her family & expressed her desire to rejoin her family. She never intended to find her abusive husband & reconcile with him. But sometimes, things do not go as planned, Reshmi’s brother retaliated when he received the news of her sister coming back.  The social workers also took the aid of police & negotiated regarding the same at Itamati Polics station, Nayagarh but it was in vain. The villagers very well knew she wouldn’t be accepted but Reshmi was adamant on her part as well.

With a mission to re-unite with her family, 2 social Workers of Udavum Karangal brought her to Odisha on 18th October, 2021 by train. As expected, his brother, Raghunath was furious on seeing her.  Reshmi broke down  when she heard  that her father was missing since she went out of her house.  Initially her brother refused to accept her but later on counseling by the Social Workers, he accepted her to join back.  She also has two more sisters who are married and settled.

Now her, elder sister has taken up her responsibility & assured that she wont let her leave the house again.

Just like Binod & Reshmi, there are numerous innocent people wandering cluelessly round the corner. Their families hoping for some miracles to happen through which they come home. Lets join hands to help these people, i.e., Udavum Karangal & many more to help others. There is no harm is helping others rather it adds sanity to one’s life & society.

-‘Help Others, They shall help you’.