The suspension bridge reportedly reopened last week after extensive repairs and renovation, and was crammed with people when it collapsed around 6.30 pm. 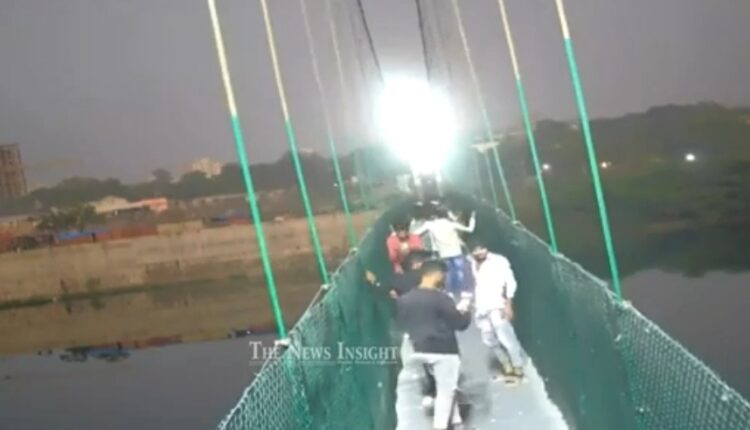 TNI Bureau: At least 137 people (including 45 kids) died after the cable bridge collapsed on the Machchhu river in Gujarat’s Morbi city on Sunday evening. The suspension bridge reportedly reopened last week after extensive repairs and renovation, and was crammed with people when it collapsed around 6.30 pm.

As per the latest reports, there were several women and children on the British era ‘hanging bridge’ when it snapped, plunging them into the water below. Some people were also seen jumping on the bridge and pulling its big wires.

A heart-wrenching CCTV footage has emerged showing the moment when the bridge in Gujarat’s Morbi collapsed on Sunday.

A private operator had reportedly carried out the repair work of the bridge for nearly six months before it was reopened to the public on the Gujarati New Year day on October 26. Some media reports claimed that 675 tickets were sold against the bridge’s capacity of 150 people.

The agreement also mentions that 8 to 12 months must be given by the company for maintenance work. However, the company defied the terms and agreements of the agreement and opened the bridge in just five months.

The terms of the agreement were decided in January 2020 after a meeting was held with collector, Morbi municipal corporation and Ajanta Oreva company officials. It was decided that the price of the ticket would be hiked by Rs 2 every year.

A criminal case has been registered under relevant sections of the Indian Penal Code 304, 308, and 114 against the collapse of the suspension bridge over the Macchu. The case is lodged against the agency responsible for the maintenance of the bridge and the agency involved in the management.