Baijayant 'Jay' Panda and Jagi Mangat Panda are the Promoters and Major Shareholders of Odisha Infratech. 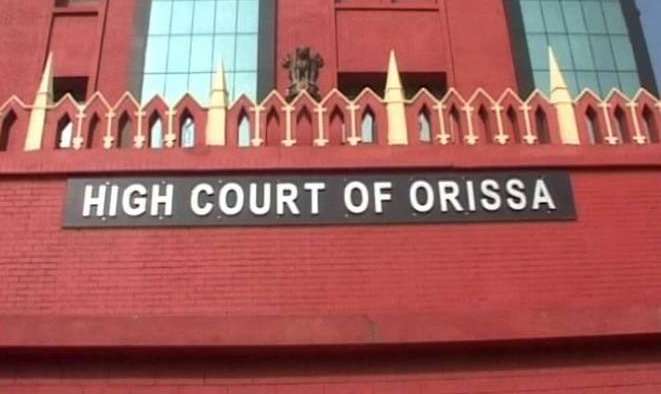 TNI Bureau: While vacating the interim relief granted to BJP’s National Vice President Baijayant ‘Jay’ Panda and OTV Managing Director Jagi Mangat Panda, the Orissa High Court has made some key observations, make it clear that criminal proceedings against their company have no malicious or mala fide intention.

The High Court declined to interfere in the criminal proceedings, more particularly at the stage of pending investigation and rejected the petition filed by the petitioners. Jay Panda and Jagi Panda are the major shareholders and promoters of Odisha Infratech Pvt. Ltd. (OIPL), the company under scanner in land grab row in Sarua in Khordha district.

Key Observations made by High Court:

👉 As the FIR said, the company (Odisha Infratech Private Limited) purchased the land in question from 22 vendors from scheduled caste community through another scheduled caste member and then transferred it to the name of company.

👉 As per the allegations, the entire patch of land measuring Ac. 7.294 decs. was originally recorded in the name of 22 vendors of SC community and the SC man who purchased it, was a Driver of the company in question.

👉 The FIR further says that the alleged consideration amount shown for sale transaction of the land is at 50% lesser price than the bench mark valuation.

👉 The allegations need further investigation to ascertain whether the sellers had been duped and whether all vendors, including the driver, have been pressurised in a fraudulent and dishonest way to transfer their land in favour of the company.

👉 In the context of allegations, it is seen that, the petitioners used the Driver as an instrument, or to say, as the ‘sham purchaser’ to get the land in their favour.

👉 It cannot be said that the allegations are so absurd or inherently improbable.

👉 The allegation that FIR has been maliciously instituted with an ulterior motive at the behest of the ruling political party, is not found with supported materials.

👉 While other cases filed against the company, may be looked into separately in their respective context, the present case can’t be considered as malicious.

👉 In the absence of any specific material in support of the contention, the submission of the petitioners that the prosecution at the behest of the ruling political party is acting with malice or mala fide motive, is bound to be rejected.

👉 All the allegations against the petitioners are definitely falling within the clause under the Scheduled Castes and Scheduled Tribes (Prevention of Atrocities) Act.

👉 The records clearly suggest that land in question originally belonged to the Scheduled Caste members and before being transferred in the name of the company. Role of the Driver who purchased and then transferred it to the company, needs further investigation.

👉 The allegations against the company prime facie satisfies the ingredients for offences against opposite party for offences under the Scheduled Castes and Scheduled Tribes (Prevention of Atrocities) Act.

👉 Contention of the petitioners that EOW has lost its jurisdiction as an investigating agency to investigate into the matter, is not found with any substance.

👉 EOW never derogated its jurisdiction by requesting the Income Tax Department to investigate into the benami transactions.

👉 Every argument against the EOW investigation, is found misconceived and without substance. 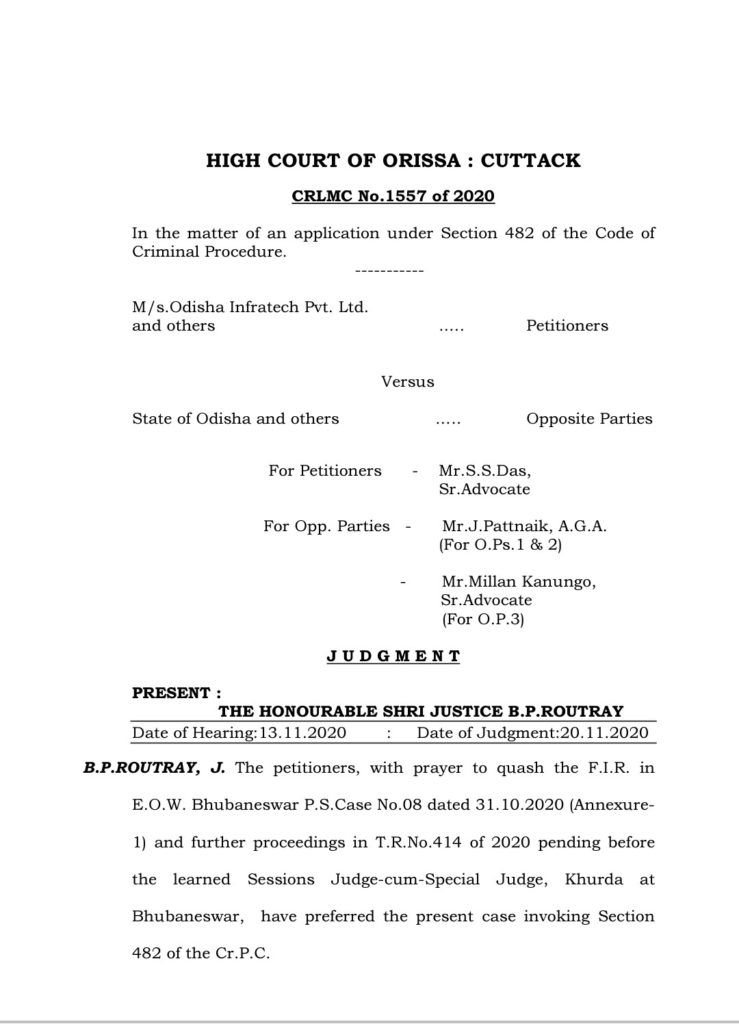 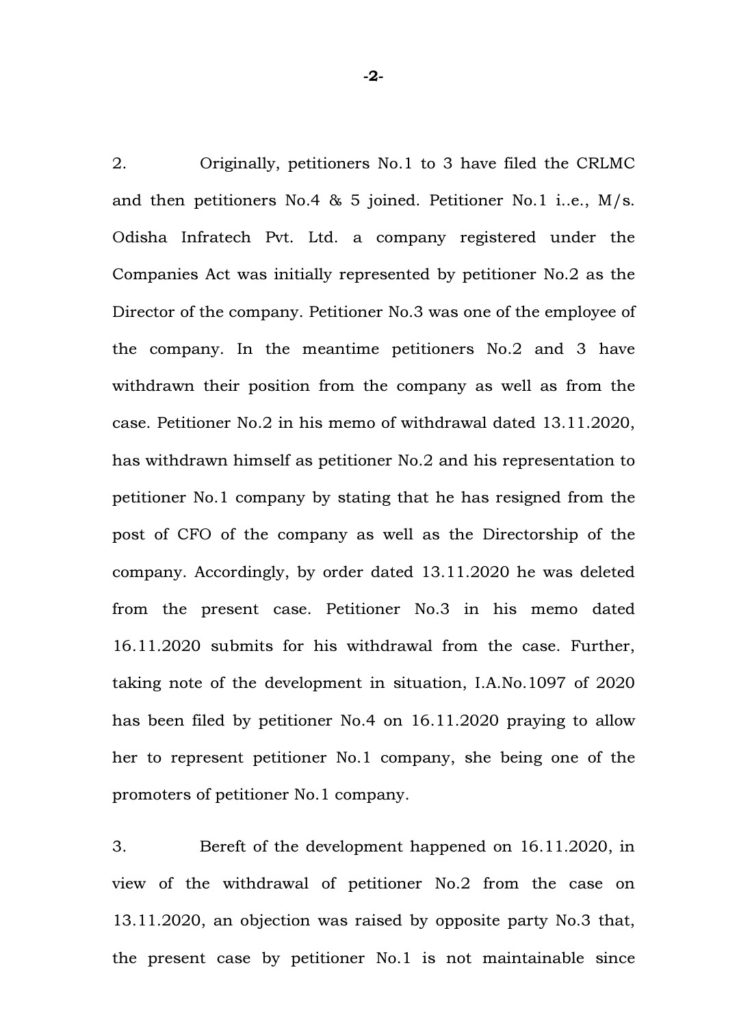 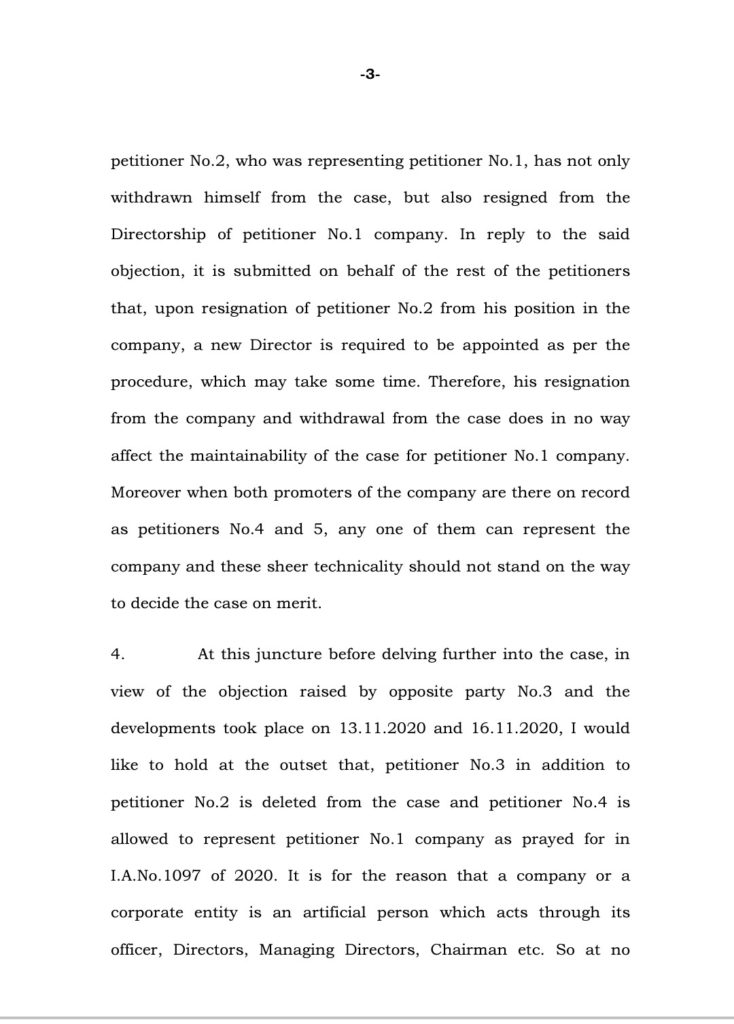 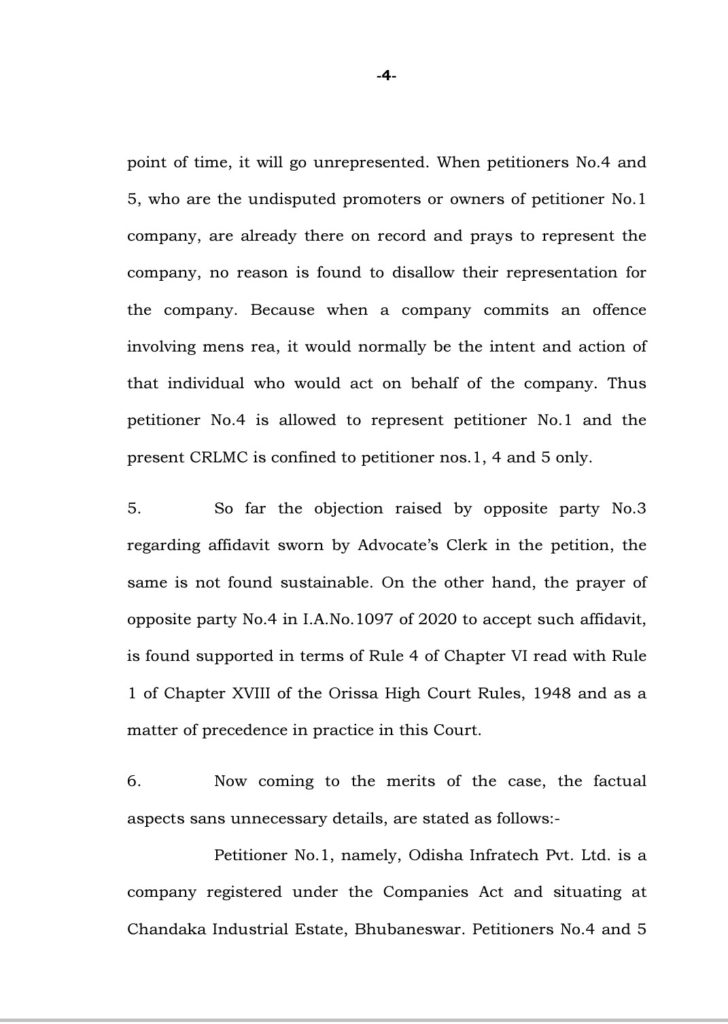 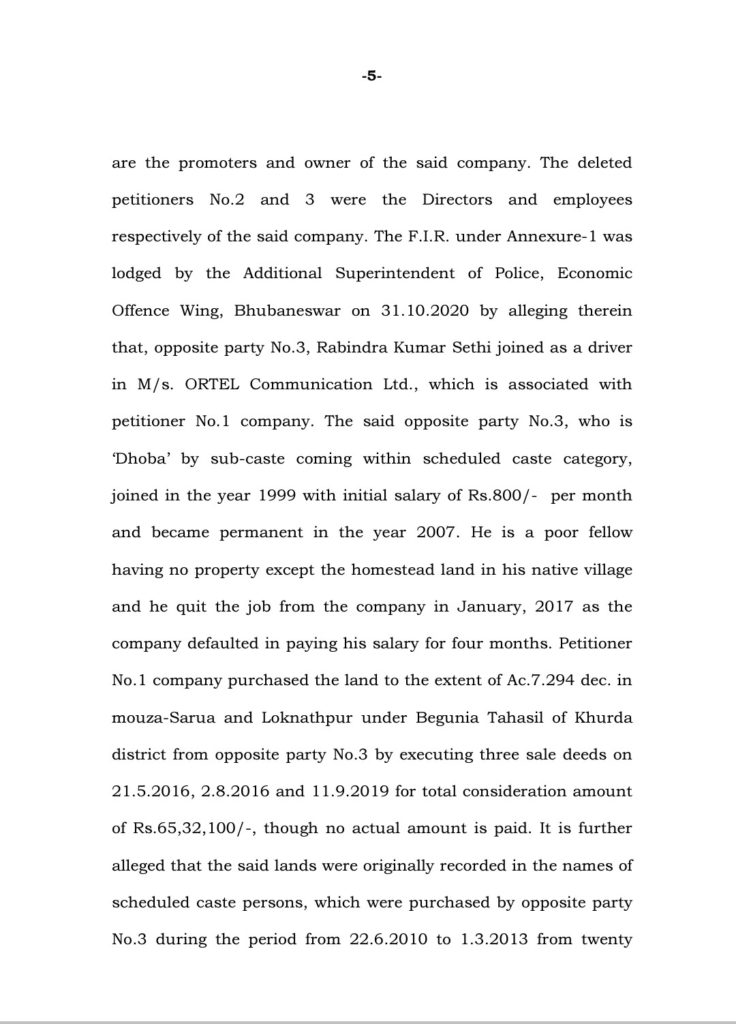 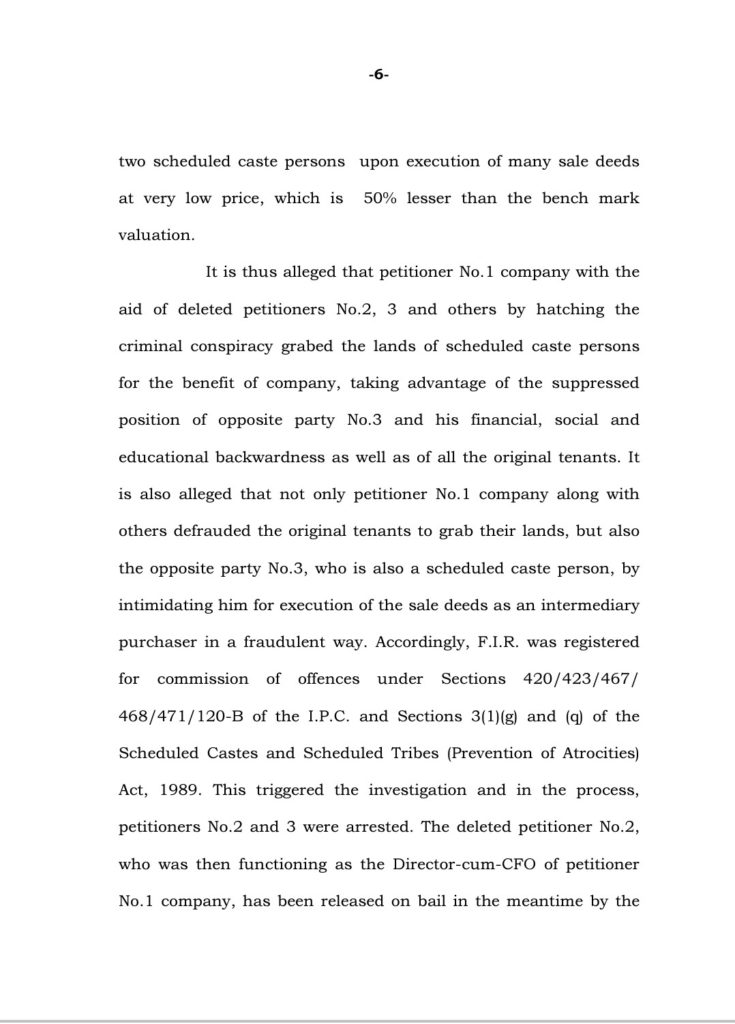 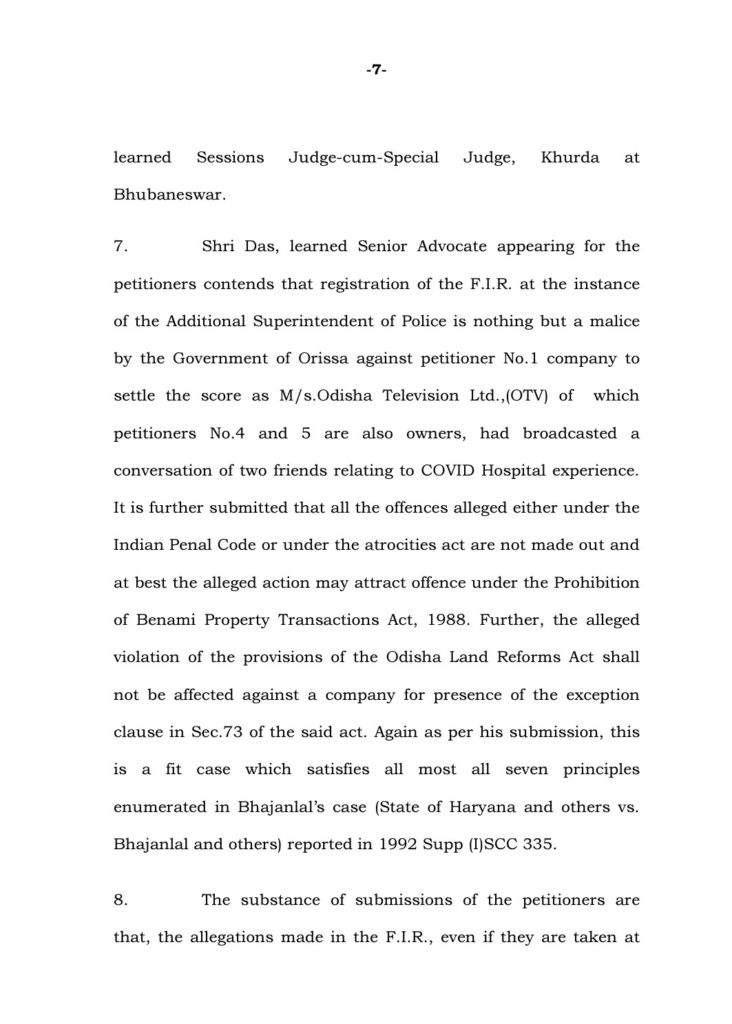 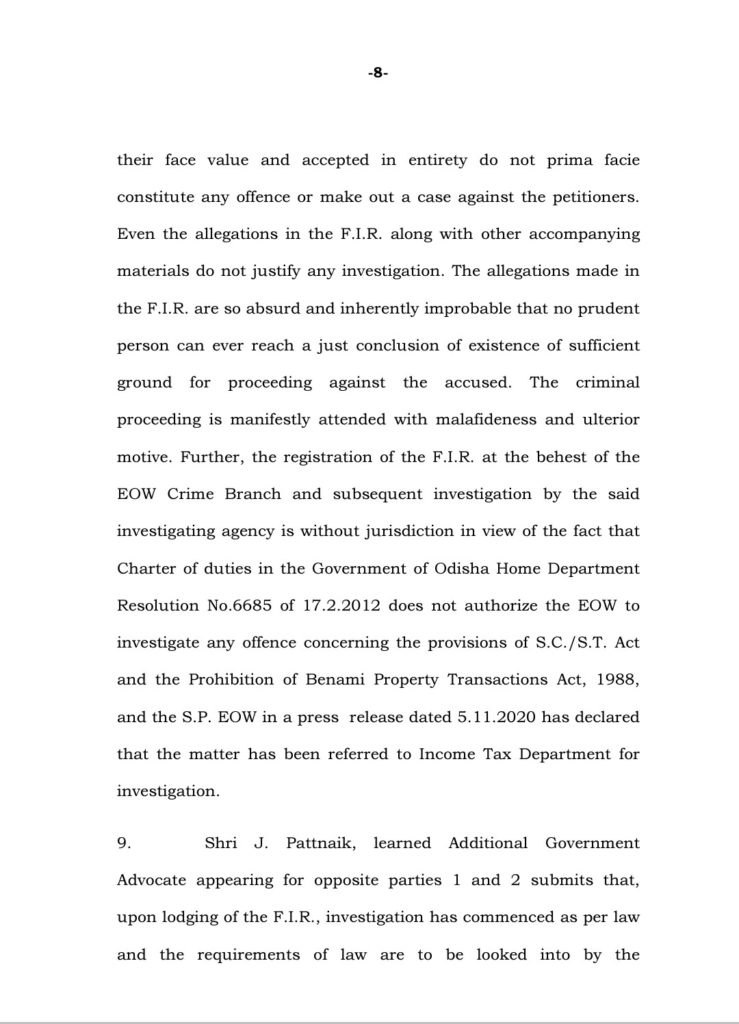 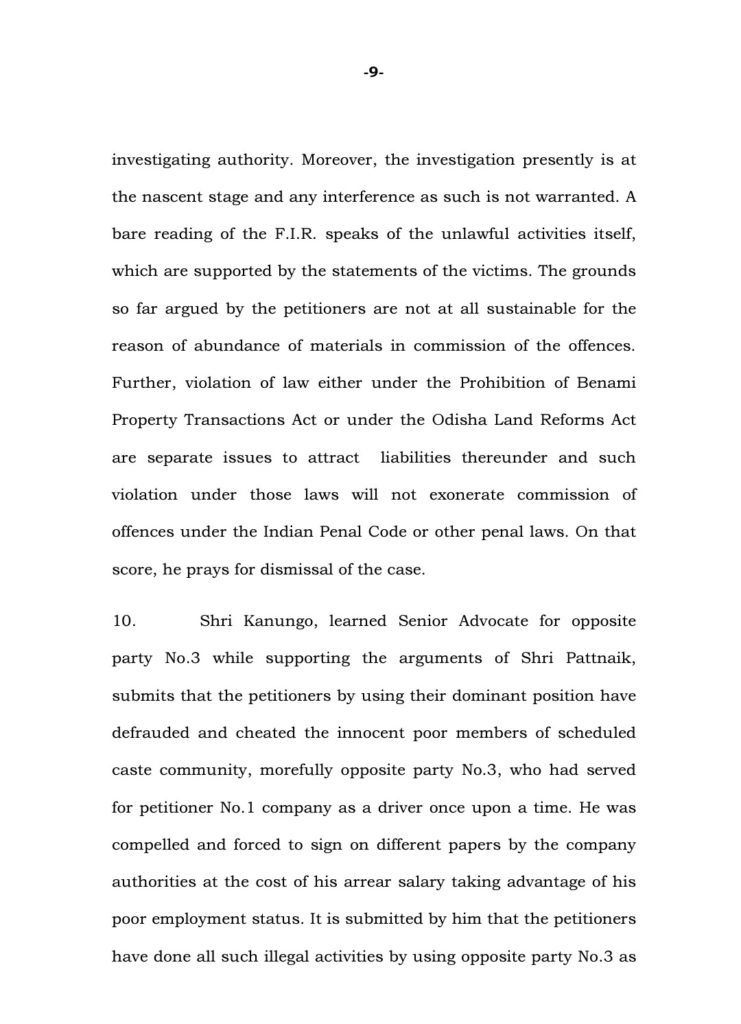 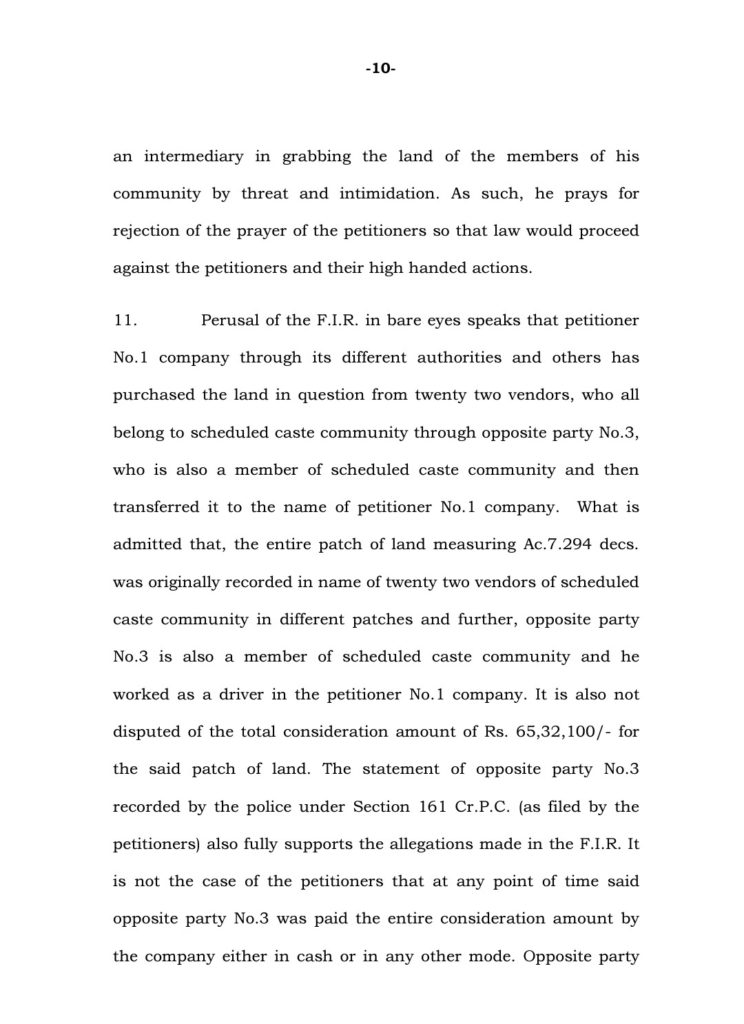 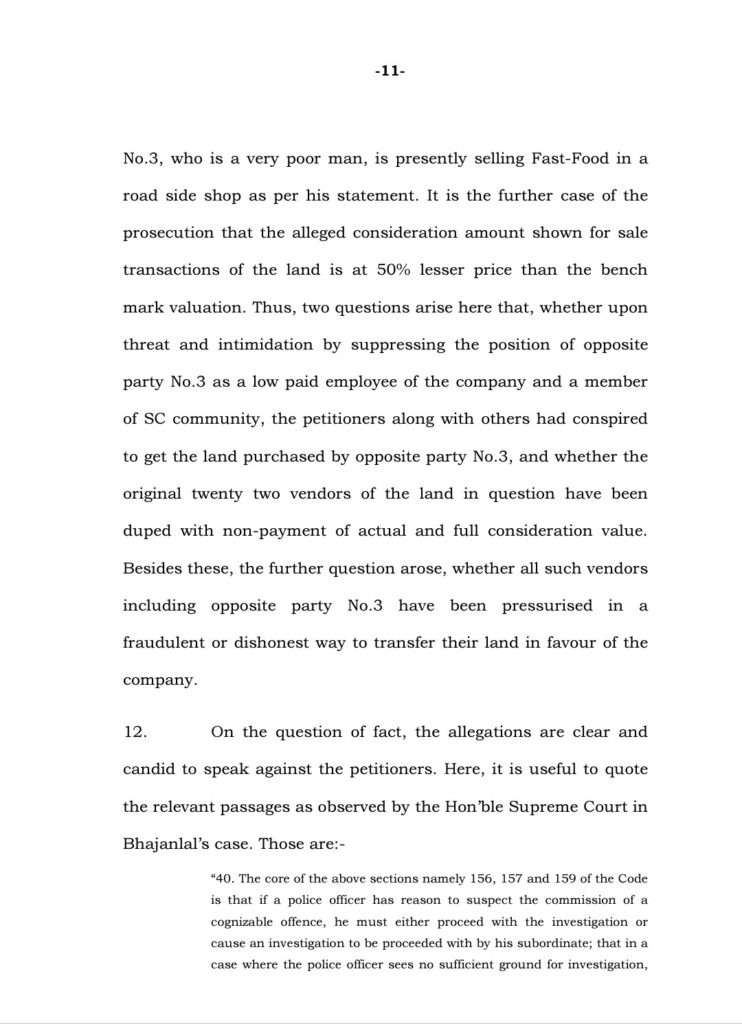 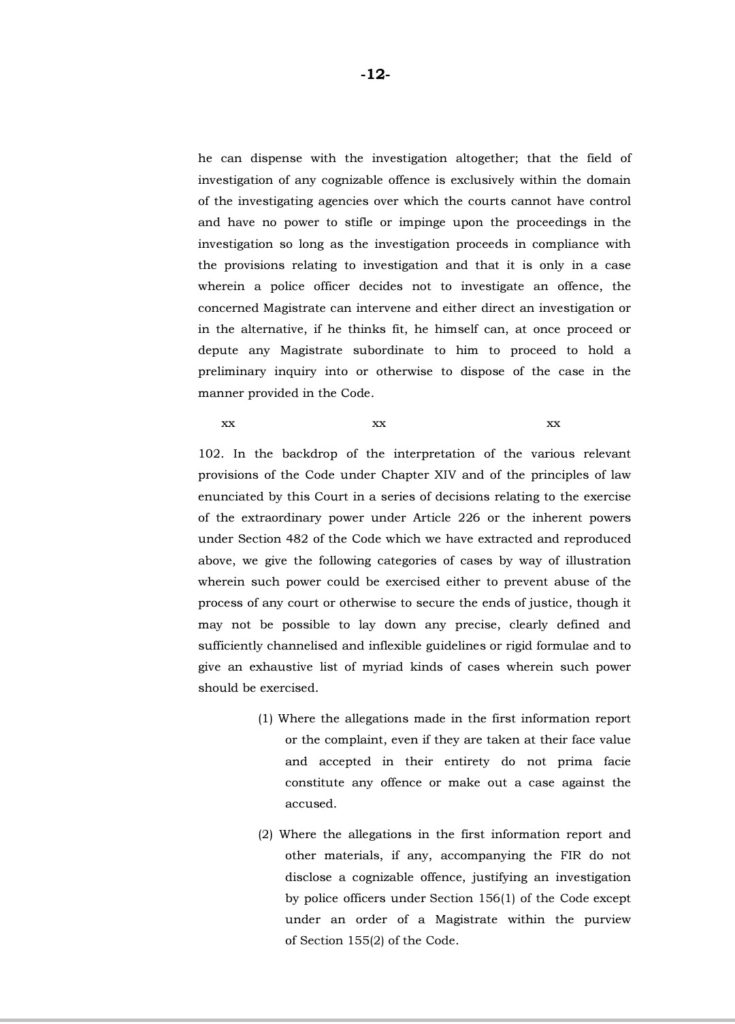 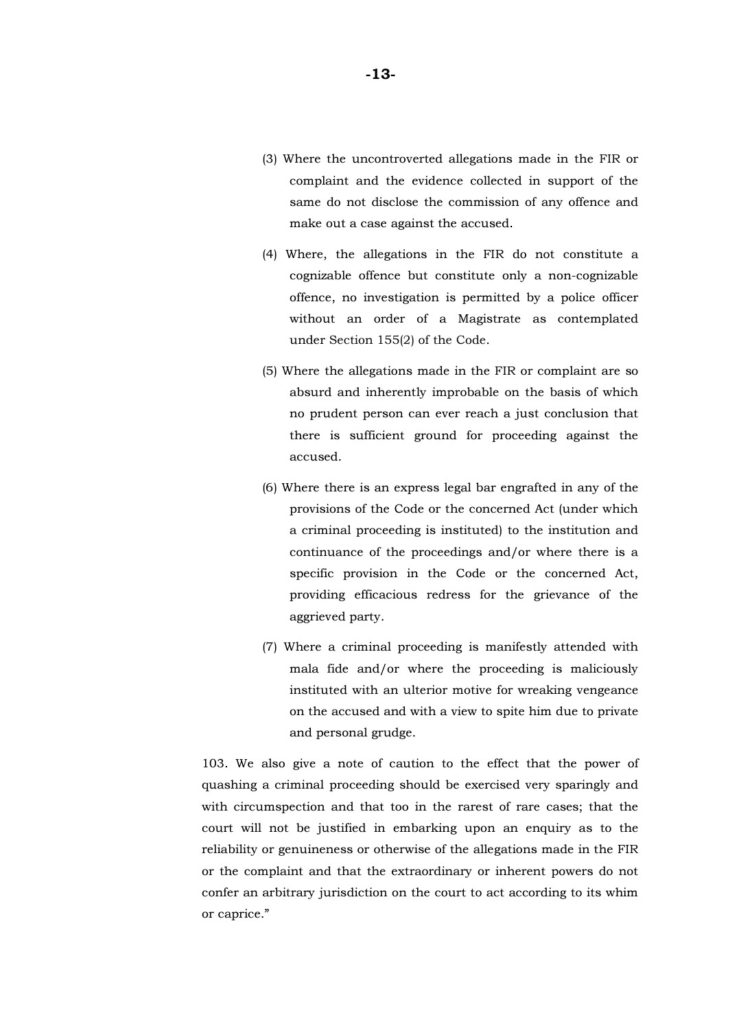 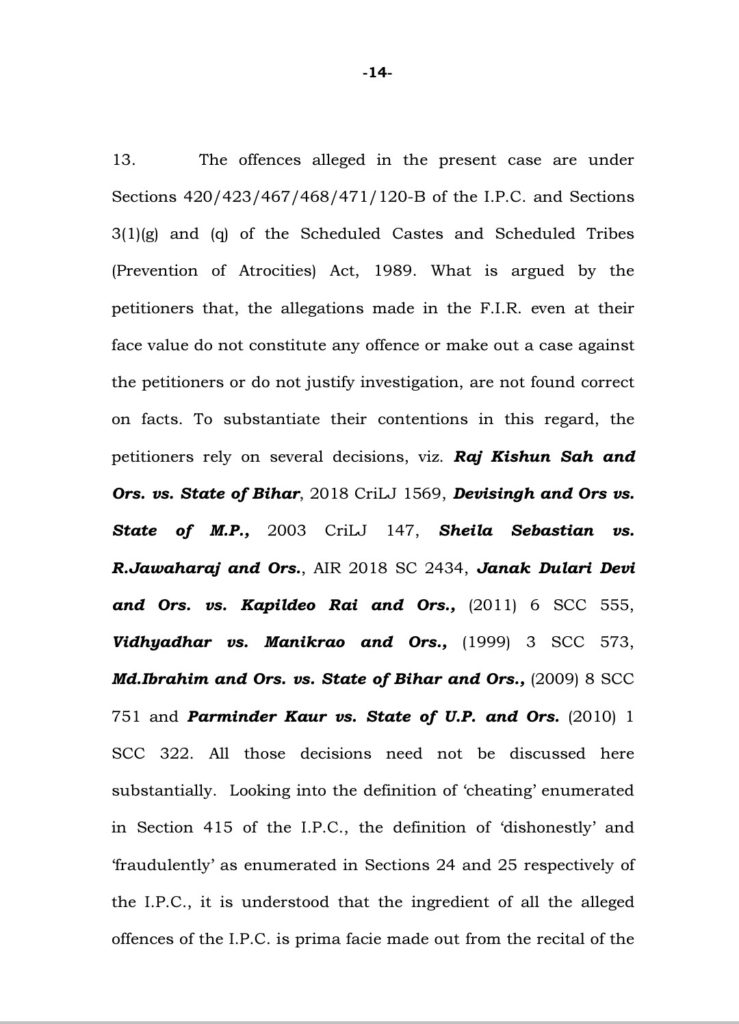 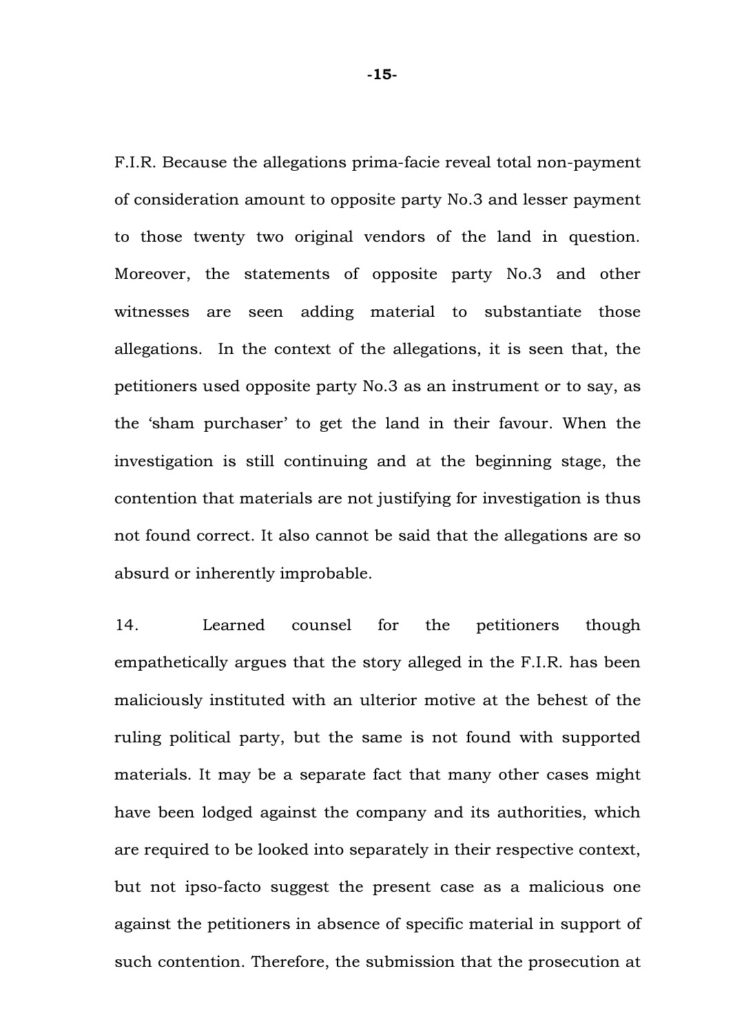 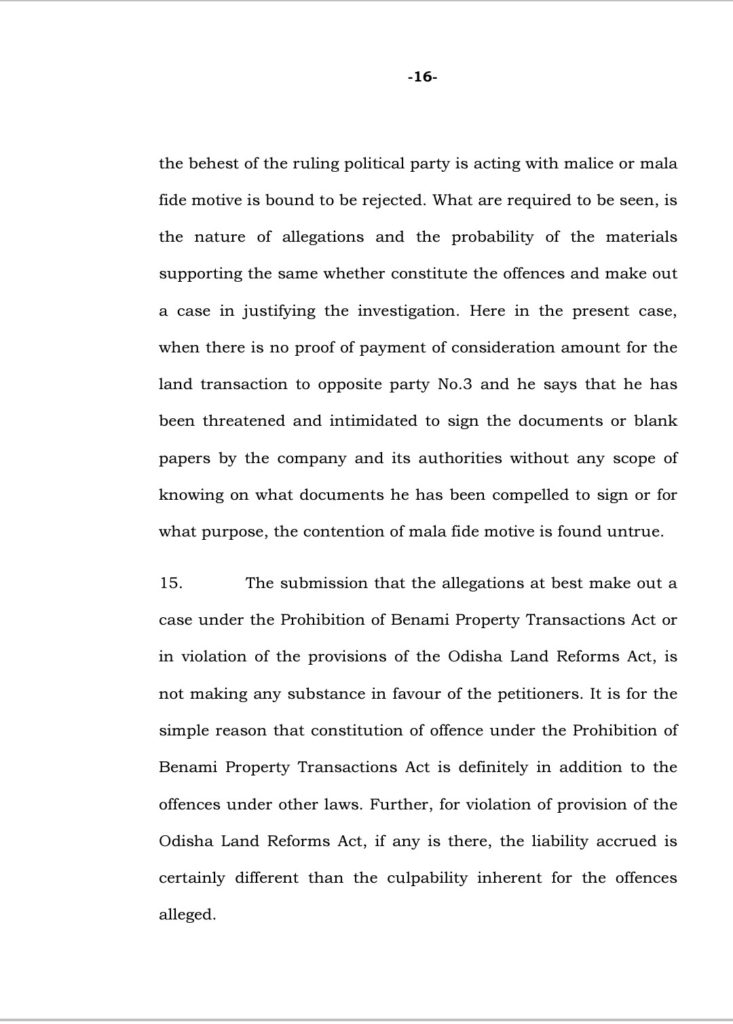 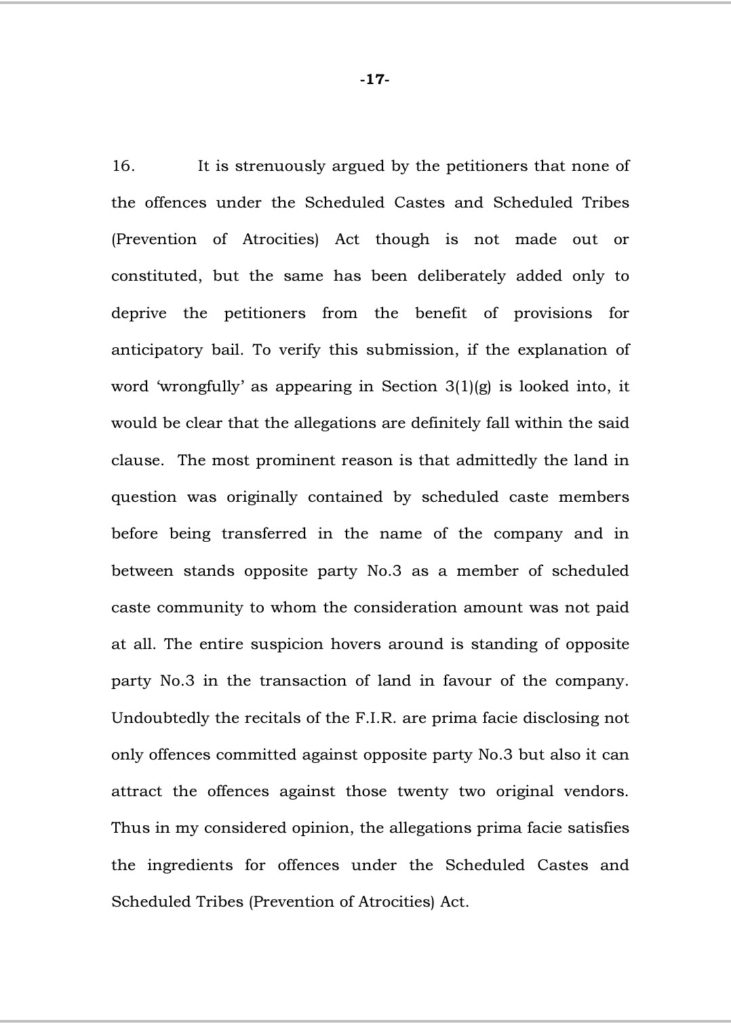 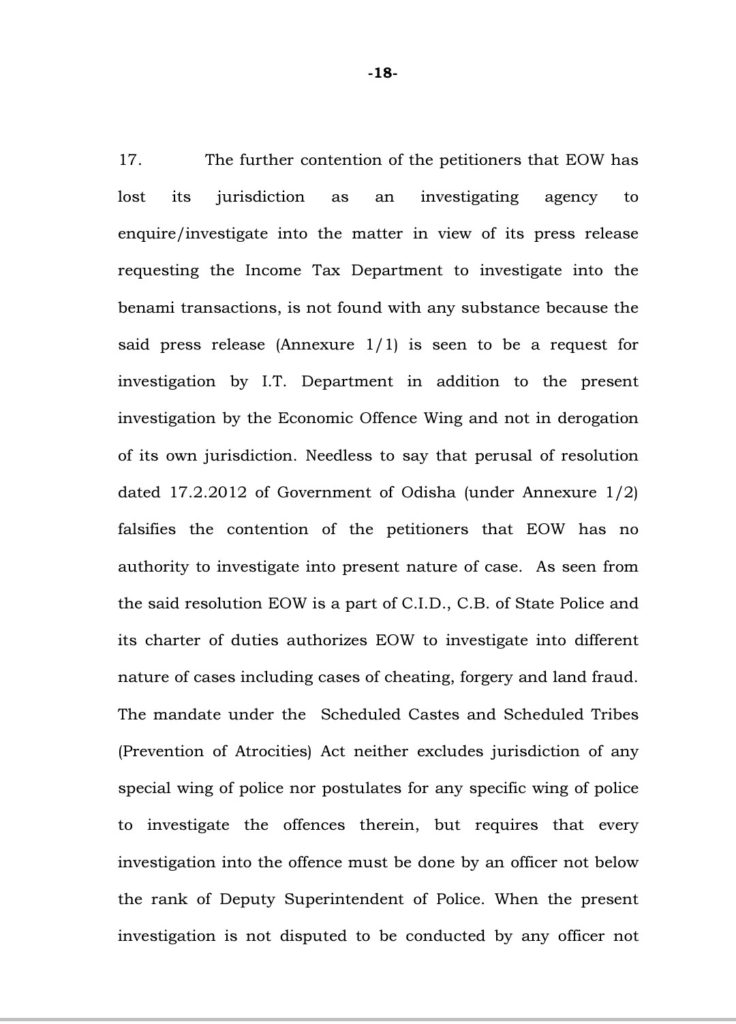 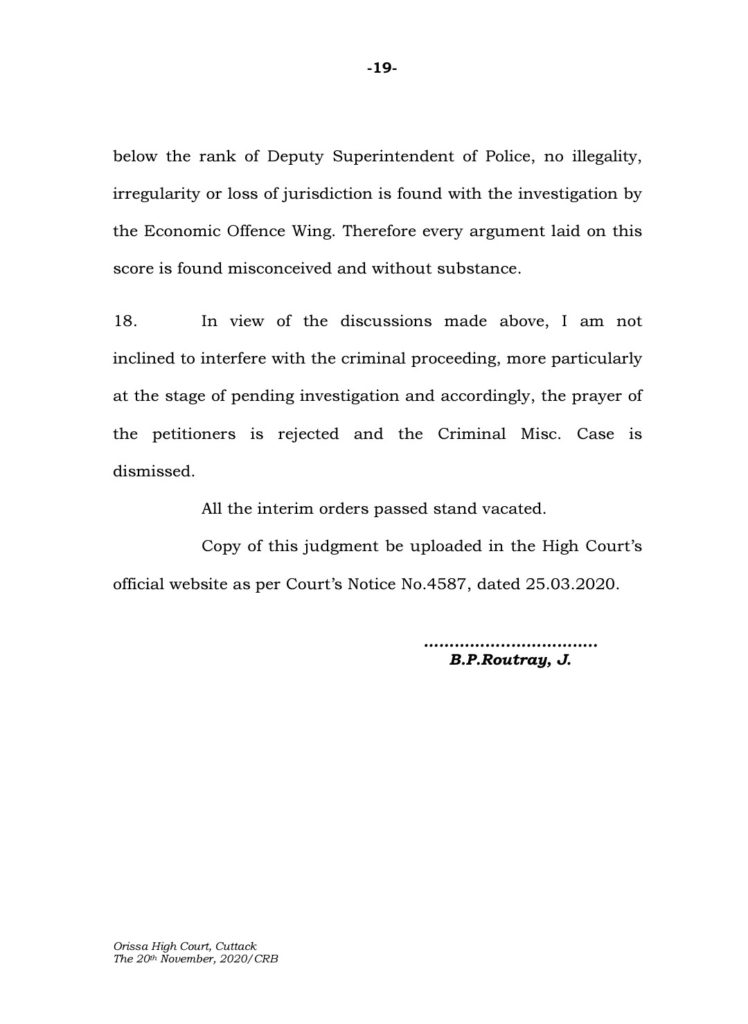