Due to the ongoing COVID-19 situation in India, the International Cricket Council (ICC) stated on Tuesday that the ICC Men's T20 World Cup 2021 will be held in the UAE and Oman. 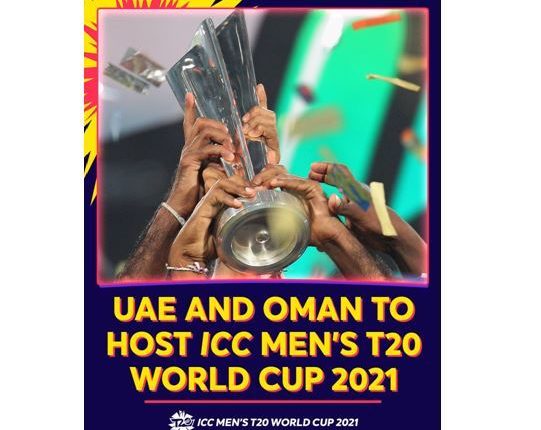 TNI Bureau:   Due to the ongoing COVID-19 situation in India, the International Cricket Council (ICC) on Tuesday stated that the ICC Men’s T20 World Cup 2021 will be held in the UAE and Oman.

The BCCI will continue to host the tournament, which will take place from October 17 to November 14, 2021, at Dubai International Stadium, Sheikh Zayed Stadium in Abu Dhabi, Sharjah Stadium, and the Oman Cricket Academy Ground.

The eight qualifying teams will now compete in the first round of the competition, which will be split between Oman and the United Arab Emirates. Four of these teams will advance to the Super 12s phase, where they will compete with the eight automatic qualifiers.

The next tournament will be the first Men’s T20 World Cup since West Indies defeated England in the final in India in 2016. Bangladesh, Sri Lanka, Ireland, Netherlands, Scotland, Namibia, Oman, and Papua New Guinea are the eight teams participating in the preliminary stage before the play-off stage and final on November 14.

According to acting ICC CEO Geoff Allardice, “Our priority is to deliver the ICC Men’s T20 World Cup 2021 safely, in full and in its current window. Whilst we are incredibly disappointed not to be hosting the event in India, the decision gives us the certainty we need to stage the event in a country that is a proven international host of multi-team events in a bio-secure environment. We will work closely with the BCCI, the Emirates Cricket Board and Oman Cricket to ensure fans can enjoy a wonderful celebration of cricket.”

Vice President Emirates Cricket Board, Khalid Al Zarooni said , “Emirates Cricket Board is honoured that the BCCI (Board of Cricket Control India) and the ICC (International Cricket Council) have entrusted us with staging and delivering the ICC Men’s T20 World Cup. The UAE’s reputation as being a safe country in which to host high-profile sporting events is a strong compliment to our government’s unwavering commitment to implementing and monitoring effective health practices during the pandemic. Having hosted a number of high-profile tournaments in recent months our team is well-prepared and ready to mobilise to ensure the success of the T20 World Cup.”