Tractor rallies at the borders namely, Singhu, Tikri and Ghazipur . 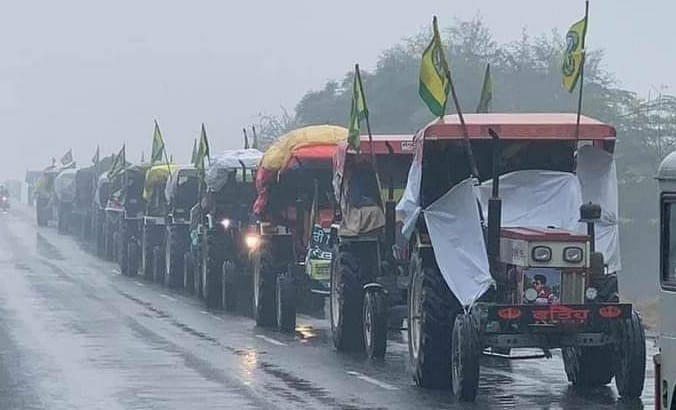 TNI Bureau: Amidst the severe cold and rain, agitation against the three farm laws intensified as the farmers organised tractor rallies at the borders namely, Singhu, Tikri and Ghazipur. The tractor rally is a rehearsal for the massive rally planned on January 26. The farmers from different parts of Haryana, Punjab and Uttar Pradesh will join the tractor parade on January 26.

The chief of Bharati Kisan Union (Ekta Ugrahan) Joginder Singh Ugrahan said that around 3500 tractors and trollies participated in the protest. Similarly, AIKS Joint Secretary Vijoo Krishnan said that around 300 tractors were present while they were crossing the Sampla toll gate. However, the number increased to 1000 when they were on the Kundli-Manesar-Palwal (KMP) expressway.

The President of Mewat Vikas Sabha, Salamudeen Meo, said that the coordinator of the tractor rally from Nuh to Palwal on the KMP expressway, Ramzan Chaudhury, was detained by the police. He also added that the police had not allowed the tractors to assemble on Gurugram-Alwar Highway to proceed towards the KMP expressway. Meanwhile, the police have blocked the Singhu, Auchandi, Piau Maniyari, Saboli and Mangesh borders.

The tractor march started at 11 AM from four different borders, Singhu to Tikri border,  Tikri to Kundli border, Ghazipur to Palwal and Rewasan to Palwal borders. Women were also seen harnessing their driving skills for the upcoming tractor rally.

The agitation follows the demands of the farmers for repealing the three contentious bills and other issues that favour the corporate houses. The seventh round of talk went inconclusive on Monday.