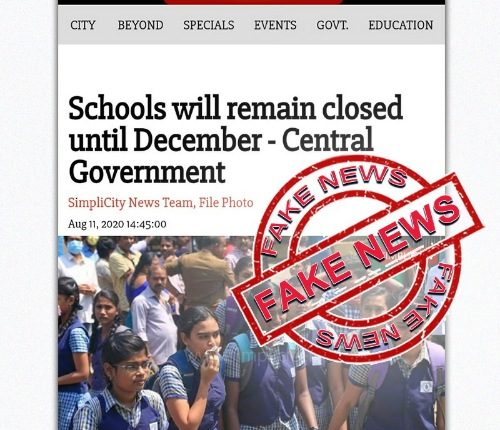 TNI Bureau: A news website recently claimed that Centre has issued guidelines to close all schools till December 2020. The report has gone viral on Social Media.

The PIB Fact Check has tweeted today, rubbishing the claims as FAKE. Government has not made any such decision, it clarifies.

School, Colleges and all Educational Institutions across the country remain closed since March 16 in view of Corona Pandemic. The Government has not taken any decision to reopen those even though India is now going through the Unlock 3.0 phase.

A news agency has reported that the Central Government has decided to not re-open schools until December.#PIBFactCheck: Government has not made any such decision.#FakeNews pic.twitter.com/az7JDcOmWn