Cyclone Amphan may move towards Bengal; Heavy Rains in Odisha 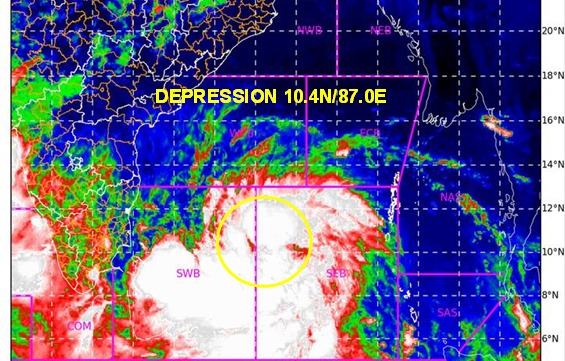 It is very likely to intensify rapidly into a Cyclonic Storm by today evening and further into a severe cyclonic storm during subsequent 24 hours. It is very likely to move north-northwestwards initially till 17th May and then re-curve north-northeastwards across northwest Bay of Bengal towards West Bengal coast during 18th to 20th May 2020. It currently lies centred 1060 KM off south Paradip coast & moving at 20 KM per hour.

The Coastal Odisha is likely to experience light to moderate rainfall with heavy falls at isolated places from 18th May evening and heavy to very heavy rainfalls at a few places on 19th May and isolated heavy rainfall over northern Odisha coast on 20th May 2020.  The cyclonic storm is likely to make a landfall at Bengal coast on May 20.

A total of 12 districts including Gajapati, Jagatsinghpur, Kendrapara, Bhadrak,  Balasore and Mayurbhanj have been put on alert. Collectors of coastal districts have been asked to identify alternative buildings which will be used as cyclone shelters.

Jagatsinghpur, Jajpur, Bhadrak, Balasore & Mayurbhanj likely to witness heavy rain from May 18 accompanied by a wind speed of 75 to 85 kmph from May 19.

The Special Relief Commissioner (SRC) Pradeep Jena informed that 100% staff in the affected districts has been asked to join till the cyclone situation is over. There is nothing to panic as there are chances of sporadic heavy rain.

The inmates of quarantine centres located within three kilometre radius from the coast will be shifted to other safe locations.

Fishermen are advised not to venture into north Bay of Bengal along and off North Odisha, West Bengal and adjoining Bangladesh coast during 18th to 20th May 2020.