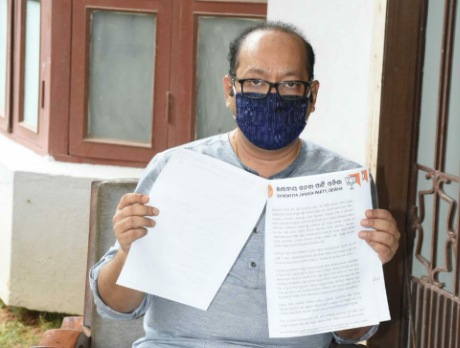 TNI Bureau: The Bharatiya Janata Party (BJP) has upped the ante and slammed the Odisha Government for “failing” to deal with the COVID-19 crisis in the State. BJP’s State Vice President Bhrugu Baxipatra held a press meet today asking Chief Minister Naveen Patnaik to seek Centre’s support to handle the situation that is going out of control.

Bhrugu accused the Odisha Governmnent of hiding the COVID-19 deaths in Ganjam district citing the examples of Basant Sahu, who died on 24th July, but his death went unreported till 28th July. He also raised the issue of Rabindra Pradhan of Berhampur, whose death at the COVID Hospital came to light after 3 days. Quoting their family members, the BJP leader sought explanation from the Governmnent and wondered why such negligence is being shown.

Citing the death of a non-COVID-19 victim in Berhampur a couple of days ago and his son’s emotional plea that failed to move the Ambulance Driver, Bhrugu Baxipatra sought to draw attention to the massive ambulance crisis in COVID Hotbed Ganjam district.

The BJP also questioned the Odisha Government on its reluctance to deploy more Private Doctors in Hotspot districts like Ganjam. “Shifting the Doctors from other COVID infected districts to Ganjam, is not the right solution, as it would hamper the healthcare services in those districts,” said Bhrugu.

Bhrugu Baxipatra came down heavily on the Odisha Government for delaying setting up of Plasma Bank in Ganjam district, which should have been done long ago. “Delhi Government started plasma therapy two months ago. But, we failed to rise to the occasion. Our Govt woke up late, but yet to expedite the process. Since Ganjam has highest number of recovered cases in the State, it would be easier to get matching plasma here. But, things are not moving due to the callousness of the government,” he alleged.

The BJP also slammed the IAS/OAS officers deployed in COVID Management, saying there is no accountability or transparency. “A few officers rule the roost, but it’s not helping the people on the ground. People are dying because of the mismanagement of COVID-19 situation,” said Bhrugu.

“Ganjam is known for labour force and human resources. They are the assets of Ganjam District and are the economic backbone of the State. People of Ganjam have supported CM Naveen Patnaik and BJD for the last 20 years with an overwhelming majority. But, they are not getting what they deserve. It’s high time the CM swings into action to mitigate the crisis,” said BJP leader Bhrugu Baxipatra.

“When Delhi was facing the COVID-19 crisis and failed to contain it alone, it took support from the Centre. Thanks to the coordination between Union Home Minister Amit Shah and Delhi CM Arvind Kejriwal, things have drastically improved in Delhi. In terms of active cases, Odisha is today ahead of Delhi, which is a dangerous sign. There is no harm in seeking central support. The Odisha CM should not waste time and talk to PM Narendra Modi and HM Amit Shah to seek their support to deal with this unprecedented COVID crisis,” he added.