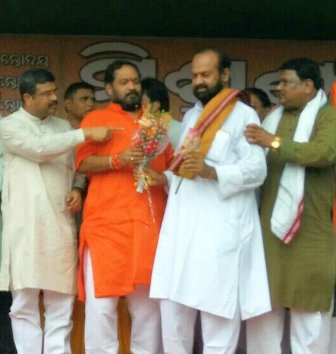 The induction of Ashok Panigrahi into the BJP fold, has added more spices to the ‘Battle of Bijepur’, which is considered as the semifinal in the run up to 2019 assembly polls. Ashok Panigrahi is a former BJD MLA, who turned rebel in 2014, contested as independent and contributed to the loss of party’s official candidate Prasanna Acharya.

Ashok was inching closer to the BJP even in the last Zilla Parishad polls and reportedly secretly helped the saffron party to establish its lead. As he was ignored yet again in favour of late Congress MLA Subal Sahu’s wife Rita Sahu, who got the party’s nod to contest from Bijepur, he had no option but to launch an attack on BJD President and quit the party to join the BJP.

The BJD was the first party to prepare itself for Bijepur, while the BJP was waiting for Ashok Panigrahi. Congress has been on a sleeping mode and hardly has any chance in Bijepur. With CM Naveen Patnaik deciding to campaign in Bijepur along with senior leaders, the battle has become more interesting.

BJD’s official candidate Prasanna Acharya, who had lost the battle to late Subal Sahu of Congress (53,290) by a narrow margin of 458 votes, secured 52,832 votes.