Arnab Goswami walks out of Jail 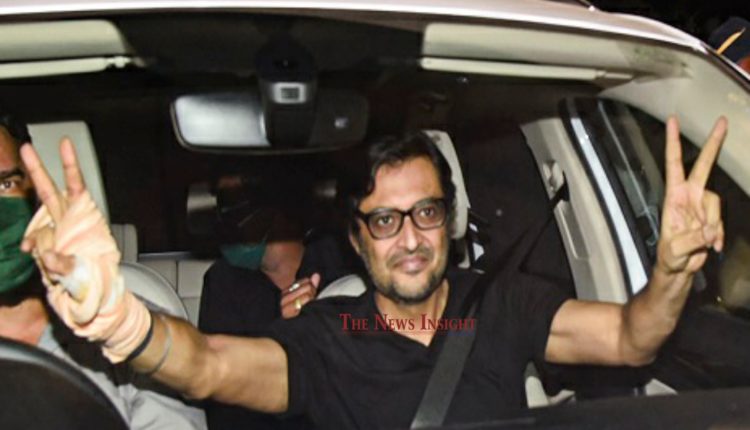 TNI Bureau: After spending 7 nights in judicial custody, Republic TV Editor-in-Chief has finally walked out of the Taloja Jail at around 8:30 PM after the Supreme Court ordered his release on interim bail.

Team Arnab played it well. Huge crowd gathered outside the jail to cheer Arnab. Almost all Republic TV Journalists were present to welcome Arnab and cover the event.

Buoyed by the presence of huge crowd, Arnab roared and chanted ‘Bharat Mata Ki Jai’ and ‘Vande Mataram’. Flashing the victory sign, he thanked the Supreme Court and said, “it’s the victory of the people of India”. “My resolve is stronger than before,” he added.

He later reached his Studio and declared a war on Maharashtra Government led by CM Uddhav Thackeray saying ‘The Game has Just Begun’.

Arnab has announced launch of Republic TV Network in all regional languages within the next 11 months. Republic will go global in the next 17 months.

Arnab Goswami and two others Neetish Sarda and Firoze Mohammed Sheikh – were arrested on November 4 in connection with the 2018 abetment to suicide (Architect Anvay Naik and his mother) case over alleged non-payment of dues. They were sent to judicial custody till November 18.

The bench comprising of Justice D.Y. Chandrachud and Indira Banerjee granted bail to the all accused including Arnab Goswami while pulling up the Maharashtra Government and making strong observation against the Bombay High Court’s judgement.