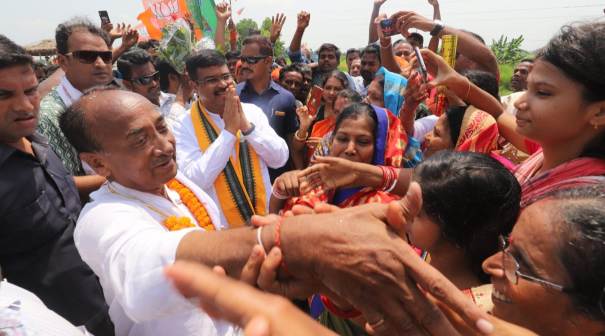 Bijoy was robbed off the ticket in 2000 even after filing nomination papers. He did not get a chance to contest as an Independent candiate. He extended support to Trilocahan Behera, a candidate of the Trinamool Congress, who went on to win the seat by more than 40,000 votes against BJD candidate Atanu Sabyasachi Nayak.

Bijoy Mohapatra was heading a new party – Odisha Gana Parishad (OGP). He had forned alliance with Congress and contested the polls against Atanu Sabyasachi Nayak of BJD. Bijoy polled 59,914 votes, but lost to Atanu (62,769) by a narrow margin of 2,855 votes.

When Bijoy Mohapatra joined BJP after the alliance came to an end in 2009, it was expected that he would beat the jinx using his popularity and sympathy wave. But, it did not happen. Bijoy managed to secure 44,990 votes, but lost to Bed Prakash Agrawalla (BJD) by 26,735 votes. Bedu Babu got 71,725 votes. Congress candidate Narayan Prasad Swain got 26,131 votes then.

Bijoy Mohapatra shifted his base to Mahakalpada in 2014, but lost to Atanu Sabyasachi Nayak. In Patkura, BJP got just 21,588 votes in his absence and finished third. BJD candidate Bed Prakash Agrawalla (89,853) emerged victorious, while Congress candidate Jayanta Mohanty got 42,138 votes.

An upset Bijoy Mohapatra, who had left BJP along with Dilip Ray, was convinced to return to the party by Baijayant Panda and KV Singhdeo. However, destiny played a cruel joke on him as the assembly polls were deferred folliwing the demise of BJD candidate Bed Prakash Agrawala. The entire BJD machinery led by Naveen Patnaik ensured Bijoy Mohapatra’s defeat in Patkura against Bed Prakash’s widow Savitri Agrawala.