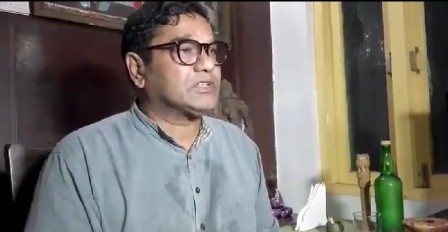 962
Share
NF Bureau: BJD leader and Barabati-Cuttack MLA Debashish Samantaray has tendered an apology for manhandling the relative of Odia CRPF jawan Manoj Behera, who laid his life in Pulwama terror attack, saying the act was unintentional. He also added that he was not aware of the person’s identity. Twitter did not take Debashish Samantaray’s shocking act and subsequent apology. He continues to draw flak on Social Media, as Twitterati demand his resignation as an MLA and urge CM Naveen Patnaik to sack him from the party. Also Read: Viral Video: Odisha MLA accused of manhandling Veer Jawan’s Relative   Here’s how the Twitterati responded to Debashish Samantaray since yesterday:

Shocked beyond words! How can he get away with this? @Naveen_Odisha take action. Absolute power corrupts absolutely! all citizens should condemn such behavior. #democracyatstake #voicelesscitizens https://t.co/aUZyqNh0Kl

Debasish samantaray's behaviour is not sound & humanitarian as seen at funeral place of the Martyer . He is unfit for legistator. Mere apology cannot change his internal audacity .CMO & BJD should not take risk for such arrogant person . @CMO_Odisha @Naveen_Odisha

So this is true as per a Niali local. Along with Debasis Samntray 2 other BJD MLA Pramod Malik and Pratap Jena were also there.
Martyr’s uncle came between the MLAs and camera. And the MLA shoved him.
What a shameless creature. He came here for paying respect or publicity? pic.twitter.com/meyDzWXhNt

The insensitivity and inhumanity with which BJD MLA Debashish Samantaray treats the kin of braveheart Manoj Behera who made supreme sacrifice for the nation will make any patriot's blood boil. This deep-rooted arrogance and feudalistic mindset is what BJD is all about. SHAMEFUL! pic.twitter.com/dlvoSSU4oD

Watch the insensitive behaviour of Cuttack MLA Debashish Samantaray towards the relative of Jawan who was martyred in #PulwamaTerroistAttack in his last ritual session. Is this the way how he condemn for the lost lives !?! pic.twitter.com/Cvhq8DpRDQ

@bjd_odisha if this video of our martyr is true then, m sorry it's disgusting to support you Mr Debasish Samantaray or BJD. Self examination of BJD entities is must.Hurt by @Naveen_Odisha selection of samantaray
M still a die hard fan of NP but m thinking over it agn. pic.twitter.com/QsRLNq1CDc

.@crpfindia @adgpi @rajnathsingh @nsitharaman @DefenceMinIndia this is how @bjd_odisha MLA honoured the martyred jawan by thrashing and manhandling his family members. We the people of #Odisha urge you restore our faith by bringing justice & sacking party president @Naveen_Odisha https://t.co/pc6S1hGdeR

Shame !! Such People’s Representative Who Don’t Know How To Treat The Citizens . This is so disrespectful attitude of the MLA Of @bjd_odisha . @Naveen_Odisha @CMO_Odisha , You need to take action on this MLA. Shame! To have such a leader who doesn’t know how to treat people !! https://t.co/w6xdPChJGv

@Naveen_Odisha @bjd_odisha Sir this needs your intervention. This is power drunk behaviour at a tragedy time. Hope you will take action. https://t.co/ly0bpXAswA

Did @Naveen_Odisha as the leader of @bjd_odisha appolise before the martyred family and people of Odisha; for the uncivilized and inhuman deed of his MLA. https://t.co/dK4IVHBJJo

I was avoiding tweeting this yesterday because I could not being myself to believe that this is authentic.
This is the crass arrogance of @bjd_odisha leaders. This is the behavior that they bring to the last journey of a martyr. https://t.co/IkspRoceM0

This is awful. This is not what BJD stood for when it was founded (& for more than a dozen yrs thereafter).
It was bcz its culture was morphing into this that i spoke out, was ostracised, & quit.
Glad i left, i cd'nt be part of something that openly humiliates martyrs' families? https://t.co/1F10PULzve

This Goonda @debashish_mla is a habitual offender. He’s the henchman of @Naveen_Odisha, who once slapped senior BJD leader in front of NaPa. He’s involved in land grabbing &various other illegal activities. What else one should expect when Naveen Babu himself promotes such goons. https://t.co/S3wsvPd3Y9

Terrible and senseless act. Speaks volumes of his upbringing. The voice over says the person who was forced to sit was a relative of the deceased. Most unfortunate. https://t.co/pgYE9OjQgV

The MLA should apologise immediately. https://t.co/4MvDQ9hOTQ

I'm sorry but this is even worse. No one deserves to be treated like this, irrespective of whether he is from the martyr's family or not, especially by an elected representative. This apology is flawed at so many levels. https://t.co/AkLaww5jEn

All this was for publicity na? He manhandled the person because he came in between him and the camera na? Chalo, it was not in vain then. Plenty of publicity he is getting now, and plenty on the way I'm sure. https://t.co/JknGE5oZgy

Manhandling someone who is not a relative of the Martyr is fine for him then???? What people are raising here is basic humanity and common sense not politics.

What nonsense Is this? If he were not the relative of the martyr then He would have justified his actions? Desbashi Samntray the MLA has apologised . A kind of victory ✌️ @BaiyaReporter @confused_odia ? https://t.co/cGmRM3tYcs

When power goes overhead then audacity happens. @bjd_odisha #MLA @debashish_mla crossed all limits when he thrashed relative of a #PulwamaMartyrs at his last rites.
Sorry state of affairs in #Odisha

This govt has to change 4 #NewOdisha @narendramodi @AmitShah @dpradhanbjp pic.twitter.com/8zGWRHcGFC

So to humiliate personal identity is a must!!
After doing you can say sorry..
Understood..@Naveen_Odisha @CMO_Odisha https://t.co/3DC4WF4VJs

All this tribute is meaningless if you don't #PunishDebashisSamantaray https://t.co/iSsltm1ilN

This is an elected MLA of @bjd_odisha from Odisha seen manhandling the dead crpf soldier's family when he stood up during photo opportunity. Best leader for idiots who keep voting for these scums. @odishatroll @AvedHDas @BJP4Odisha @INCOdisha @AAP4ODISHA @DashNistha pic.twitter.com/BvqYYfVFHx

You stood by in grief with the family but the family member blocked the flow of your grief to the camera so you shoved him down.#PunishDebashisSamantaray

After reading this well intentioned apology by Hon'ble, i remembered Ricky Ponting had " clearly requested " Sharad Pawar to " move aside " , during that famous presentation ceremony. Off course, both events are unrelated. https://t.co/Na1SSH5GHs