The rural and urban areas across Odisha still reverberate with the spell-binding performance of singer Samrat Prahalad Sahoo. 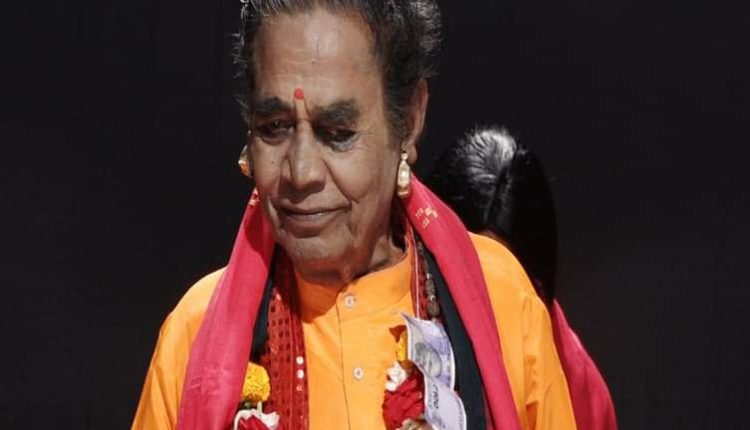 TNI Bureau: From time immemorial, the spiritually fertile soil of Odisha has retained its cultural ethos through various rich expressions of divine love. Pala, being the enchanting combination of bhajan, lilting music, and movement of bodies, figures as one of the traditional folklore arts and it has held generations in the thrall of its power-packed performance.

The historical facts place “Pala” as the artistic expression that culminated in the Mughal era and combined both the adulation of Hindu deity, Satya Narayan, and the Pir of Muhammadanism, popularly known as the cult of “Satyapir”.

The rural and urban areas across Odisha still reverberate with the spell-binding performance of singer Samrat Prahalad Sahoo, who breathed his last yesterday on 30th May in his ancestral village – Sarua. The Maestro held generations captive by his traditional Odia songs like Chhanda, Odishi, Champu, and Chupadi along with the recitation of Sanskrit verses from scriptures.

His matchless versatility lay in the fact that he had always made sincere efforts to keep ‘Pala’ in its purest and ancient forms without allowing tinge of modern music enter their sanctity. He earned the accolades of being one of the pioneers, who popularized the inimitable art of singing and dancing in the performances of “Pala” in the pristine statehood of Odisha and outside. Lauded as the one with admirable command over various scriptures and folklores, he carried the burden of popularizing this unique form of art till his last.

Known as the earliest performers of ‘pala’” from childhood, Prahalad Sahoo was one of the humblest disciples of Maestro Biswanath Pattajoshi. His unique styles in recitation and presentation of literary Stanzas gradually transformed him as a torch-bearer of this folk art that tinged with melodious but pleasant rhythms of popular folk art.

Enriching his performances through the colloquial expressions, the Maestro held the distinction of being the celestial persona in the contemporary world of folk art. He was admired as the tireless performer, who could keep the audience enthused till the last word of his recitation. Till his last, he never allowed his age to put a dampener on his spirited performance.

“Prahalad Sahoo will go down in the history not only as a singer but a crusader for the survival of all the dying arts in folk songs and music. He mastered all the important works of distinguished poets like Upendra Bhanja, Dinakrushna, Jadumani,Gangadhar, and especially the literature of “Panchasakha. His death is undoubtedly an irreparable loss to the entire fraternity of Pala lovers”, says Madan Jena, an eminent Pala Singer and President of Pala Parishad.