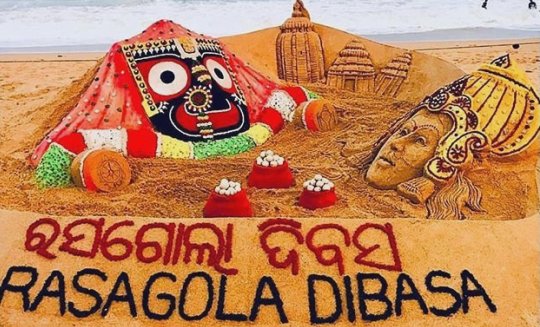 TNI Bureau:  On the auspicious occasion of Niladri Bije, ‘Rasagola Dibasa’ is being celebrated across Odisha today with traditional enthusiasm.

Renowned sand artist Sudarsan Pattnaik created a sculpture on Rasagola Dibasa at the Puri sea beach that depicted a picture of Lord Jagannath and Goddess Lakshmi with Rasagola placed in earthen pots.

According to the local legend, Goddess Lakshmi gets upset because her husband Lord Jagannath has picked his siblings instead of her to his aunt’s house so she locks Jai Vijay Dwar to prevents the trinities from re-entering the sanctum sanctorum of the temple. Therefore to please her, Jagannath offers her rasagolas.

This ritual is called Niladri Bije, trinities’s return to Shree Mandir. It is the last day of Ratha Jathra in Puri.

As 2015 was the year of the Nabakalebara that took place after 19 years, from that year, the day is observed as Rasagola Dibasa to mark the birth of the mouthwatering dessert in Odisha.

As per Odia people, rasagola originated in the holy city of Puri. The experts have also claimed that the sweet is mentioned as “Rasagola” in the 15th century text Jagamohana Ramayana of Balaram Das.

Electric Vehicles in India – A Step towards Clean Mobility