No Deaths due to Lack of Oxygen during Covid 2nd Wave: Govt

Demand for medical oxygen increased dramatically during the second wave, peaking at over 9,000 MT, up from 3,095 MT in the first wave. 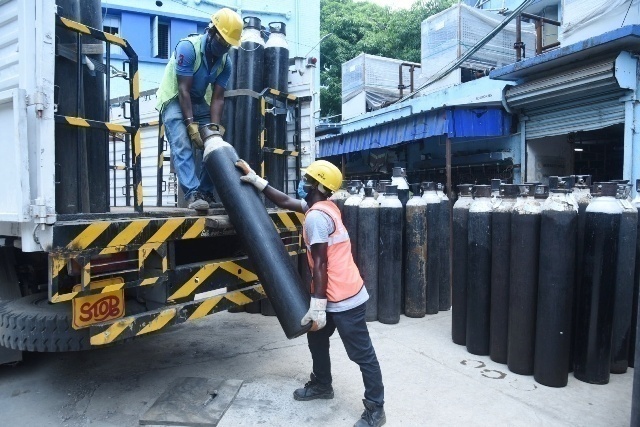 TNI Bureau:   During the second COVID-19 wave, no deaths owing to a shortage of oxygen were particularly recorded by States and UTs, the Government informed the Rajya Sabha on Tuesday.

However, demand for medical oxygen increased dramatically during the second wave, peaking at over 9,000 MT, up from 3,095 MT in the first wave, prompting the Centre to intervene to ensure equal distribution across the states, according to the report.

In response to a question about whether a large number of COVID-19 patients died on roads and in hospitals during the second wave due to a severe lack of oxygen, Minister of State for Health Bharati Praveen Pawar said that health is a state subject and that states and UTs periodically review the number of cases and casualties to the Centre.

“Accordingly, all states and UTs report cases and deaths to the Union Health Ministry on a regular basis. However, no deaths due to lack of oxygen have been specifically reported by states and UTs,” Mr Pawar said in a written reply.

In light of the rapid spike across COVID-19 trajectory in the country between April-May 2021, the Indian government has backed states and taken a number of steps, including providing medical oxygen and other consumables to provide clinical treatment for COVID-19 patients.

The provision of medical oxygen to hospitals is governed by contractual arrangements between the hospital and the medical oxygen supplier involved, according to the ministry.

“A dynamic and transparent framework for allocation of medical oxygen in consultation with states and UTs and all the stakeholders such as relevant ministries, manufacturers/suppliers of liquid oxygen, etc. was prepared,” the written reply stated.

The major factor of oxygen allocation was the state’s and UT’s active caseloads. Other criteria such as the rate of case doubling, available medical infrastructure, and so on were also taken into account. In addition, the allocation was made dynamically according to the changing epidemic load.

The first allocation order was issued on April 15, 2021, and it was amended on a regular basis depending on current case developments and supply position. As of May 28, 2021, a total of 10,250 MT had been allocated to 26 high-burden states, according to the response.

The Indian government, in collaboration with state governments, took all feasible measures to address the extraordinary increase in oxygen demand that occurred during COVID-19’s second wave. This involves increasing LMO output from 5,700 MTs in August 2020 to 9,690 MTs in May 2021, imposing limitations on industrial oxygen consumption, and increasing container availability.

In cooperation with states and UTs, as well as other stakeholders such as relevant Ministries, manufacturers/suppliers of liquid oxygen, and others, a dynamic and transparent system for medical oxygen distribution was developed.

The states were also provided with oxygen equipment such as oxygen cylinders, concentrators and Pressure Swing Adsorption (PSA) oxygen generation plants. A total of 4,02,517 oxygen cylinders have been procured or are being procured and distributed to the states.