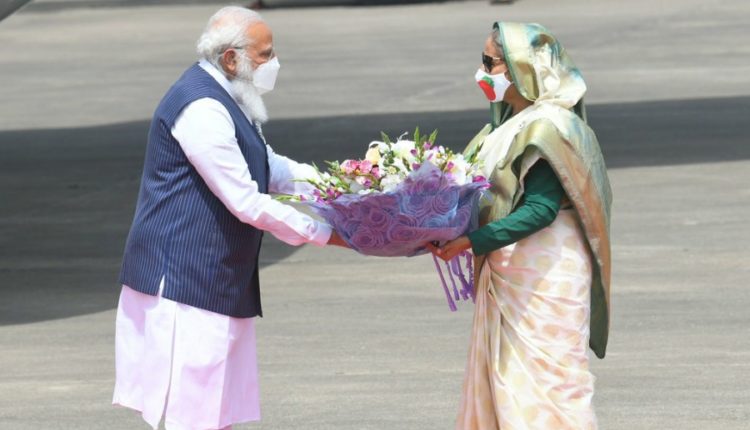 TNI Bureau: By choosing March 26 – Bangladesh Independence Day to visit that country and planning events on March 27 – day of 1st phase of polling in West Bengal, PM Narendra Modi sent a clear message that he takes Bengal very seriously and will leave no stones unturned to ensure BJP’s victory in the State.

On March 27, Modi will visit the sacred shrine of Matua sect founder Harichand Thakur in Orakandi. Matua community can swing the votes in at least 30 seats in Bengal and may have impact on 50 other seats. The Matua population is estimated at 50 million out of which 30 million are based in West Bengal. Interestingly, 15 million are listed as voters. The community has rooted for Modi, giving the BJP and edge in West Bengal polls.

PM Modi will also visit Jeshoreshwari Kali Temple in Bangladesh. These strategic moves will definitely help him win over a large chunk of voters back home. In addition, Modi’s tribute to the Martyrs of Bangladesh Liberation War and rapport with the incumbent government in Bangladesh will give him an extra advantage. The Dawoodi Bohra community welcoming Modi, may send a positive message to the Muslim community in Bengal, believes the BJP.

Despite the infighting and rebellion within the BJP, the party has managed to create a big buzz in Bengal Polls and is putting everything at stake. As on today, TMC and BJP are in neck-to-neck fight in West Bengal. If Modi continues to give such extra push to the party, the game would become more interesting in the coming days.

Grand Statue of Subhas Chandra Bose to be installed at India…