List of Movies made on the Shocking Saga of Kashmiri Pandits

Stopping to beat around the bush & starting with a disclaimer; ‘The enchanting Kashmir.’ Today it feels like doing injustice to Kashmir by addressing her with the word enchanting because Kashmir has attracted a name for Itself as ‘The Beautiful; The dangerous.' 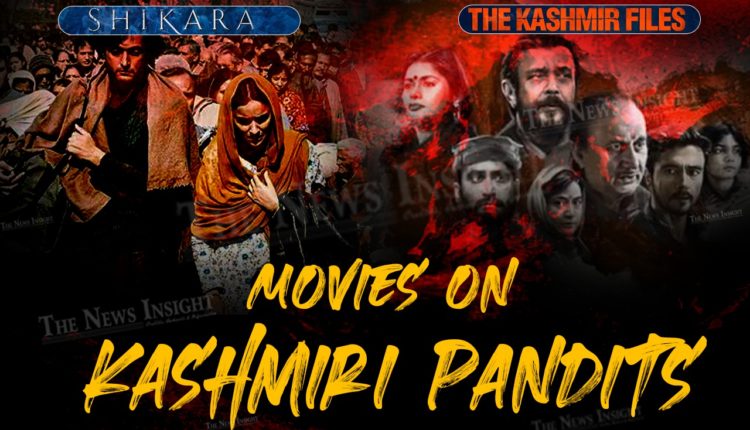 Insight Bureau: Though the nation has drenched itself with vast culture, development, technology and the most importantly,” Democracy”, but there are pages which hold the dark history engraved upon it.

Stopping to beat around the bush & starting with a disclaimer; ‘The enchanting Kashmir.’ Today it feels like doing injustice to Kashmir by addressing her with the word enchanting because Kashmir has attracted a name for Itself as ‘The Beautiful; The dangerous.’

It has been more than 3 decades since the genocide of Kashmiri Pandits in Kashmir, the pain & agony still remains the same like a fresh wound which can never be healed.

Within these passing ages, numerous have tried to reach out the nationals with the heart wrenching reality of Kashmir but have been overheard or overseen.

The revival of some of the master pieces who depicted the heart wrenching experiences of the fellow Kashmiri Pandits but were made unsung & left a void in the hearts.

Movies like ‘The Diary of a Kashmiri Pandit’, ‘Exodus & exile’, ‘Sheen’, ’23 Winters’, ‘Ghar ka Pata’, ’19th January’, ‘And the world remained silent’ &  ‘Shikara’ shared one thing in common- the quest to outreach the Indians and intimate them the dark history of Kashmir.

Today, the nation is buzzing upon the movie, ‘The Kashmir Files’. Director Vivek Agnihotri left no stone unturned to bring the ugly truth & the torments the Kashmiri Pandits faced but unfortunately, he was only able to throw light on the horrors that visited The Kashmiri Pandits or The Hindus.

The point which is weirdly intriguing is ‘The Kashmir Files’ was roaring nationwide. On one hand, few people were supporting & on the other hand some people were patting themselves for being Indians and Screamed Hindu slogans in the open streets.

All of these can be termed as a sense of patriotism. The point which is really difficult to gulp is the Political backup or the support which this movie gained is a point to ponder.

If we focus our way back to 2015, Pankaj Bhutalia’s documentary on Kashmir violence had to pave its way to the High Court for its clear release when stalled by the Central Board of Film Certification (CBFC). His hard work repaid when his documentary was released without a cut or a disclaimer.

In the year 2019, Ashwin Kumar’s film, ‘No fathers in Kashmir’ had to face major cuts by the BJP’s appointees at the CBFC.

Keeping the current scenario in the eyes, what’s irony is that Vivek Agnihotri was one of the members of India’s Censor Board. Under his monitoring, Ashwin Kumar’s movie had to face mutilation.

Contradicting to this, the compassionate response towards the Kashmir files is quite astonishing. The movie getting cleared with minimal & minor cuts raises nothing but a question mark.

A small whisper of this movie easily surpassed the screams of the movies made earlier making them unsung.

Long story short, The Prime Minister aiding such a sensitive movie & screening it nation wide is a cherry on top for Vivek Agnihotri. Though many movies have been made but they couldn’t outnumber this current movie. it seems like the political backup has made this movie so powerful that it portrays as a mission.

This sights to nothing but the major transformations of Kashmir in the near future & it seems that the Centre is all set to feather their political nest under the pseudo promotion of this movie in Kashmir.