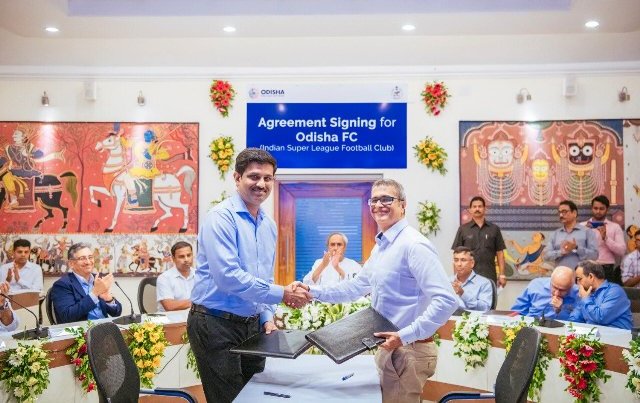 TNI Bureau:  Indian Super League club Delhi Dynamos has been  rechristened as Odisha Football Club (OFC) with the club has signed a long-term agreement with the Odisha Government at Bhubaneswar in the presence of Odisha Chief Minister Naveen Patnaik on Saturday.

The agreement has signed by the sports and youth services department of the State government with the parent company of Delhi Dynamos.

As per the agreement, the State government will support the club’s relocation through the provision of infrastructural facilities to it, including training grounds and Kalinga Stadium. The club, which was originally based out of Delhi, will now shift base and play its home matches in Bhubaneswar’s Kalinga Stadium from the seventh ISL season.

Shubham Sarangi and Ankit Bhuyan are the local players part of the team at present.

After successfully hosting the 2018 Men’s Hockey World Cup, the Odisha Government is in the process of establishing several high-performance centers for different games in the state for realizing its dream of becoming a global sports destination.

The high-performance Naval Tata Hockey Academy, a joint initiative of Tata Steel, Tata Trusts and Odisha Government, was the most recent center to be inaugurated.

The state Government has also been organizing various major sports events in recent years. It has also received provisional clearance for 2020 FIFA Under-17 Women’s World Cup at Kalinga Stadium.

Bhubaneswar Molestation Case: How Cops hunt down the Accused