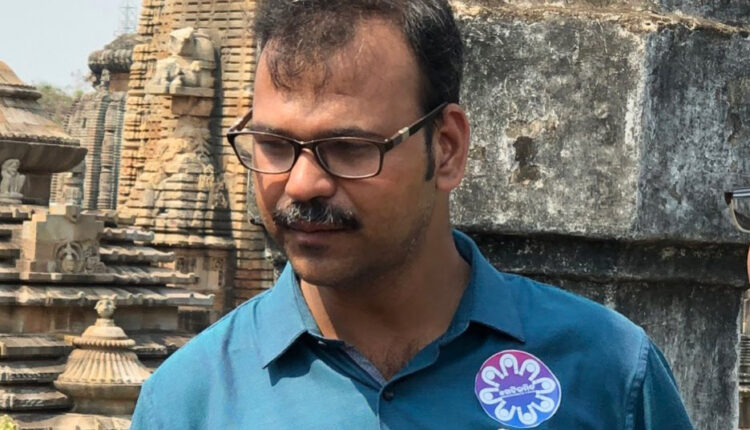 I met him online way back in 2013. He was more inclined to the ideology of Aam Aadmi Party (AAP) and kept arguing with me on various issues. Later, he changed track and stopped supporting or opposing anyone politically. We met and discussed about writing prospects for The News Insight, our English Fortnightly Newspaper. He wrote a few pieces too.

Things changed then and he completely devoted his time to Odia culture, heritage and tourism. He was a genuine person, a staunch supporter of Buddhist heritage and worked hard on Twitter and other social platforms to popularise Odia culture and tradition. He owned various Twitter handles too.

Although he hailed from Puri, he was born in Rajasthan and stayed there till the age of 25 before returning to Odisha. But, he knew more about Odisha and its culture and heritage than most of us.

On Twitter, Ashish Sarangi was one of the most popular and non-controversial figures. We kept meeting and discussing various issues. We planned a lot of things together. He tried to unite all Social Media users from Odisha. He was part of all initiatives whether ‘Khati Jamiba’ or any other heritage tours. A Mechanical Engineer by profession, he was more interested in Odisha Culture and Heritage. That was his passion and emotion too. He did extensive research on that front.

Ashish was a genuine person, full of energy, knowledge, talent. He believed in friendship and intellectual discussion and stayed away from controversies. He tried hard, but got no support to carry forward his vision.

He was badly affected by Covid Era. He had to take up a sales/marketing job to earn his livings. We both tried to establish many things, but nothing could materialise as we know the situation in Odisha. Ashish was under tremendous stress, never enjoyed the job he was in. But, he had no other options.

Unfortunately, while travelling on duty, he met with an accident on December 17, went into coma and passed away after a month. His demise brought tears to many eyes on Social Media. He was a darling of all on Twitter and Facebook. He wanted to a lot for his state, honestly and genuinely. But, no, he could not.

Ashish was 43. He is survived by his wife and a 13-year-old son. Ashish was cremated at Puri Swargadwar.

We lost him, Friends lost him, Family is in shock. And, Odisha lost a rare talent today. Social Media mourns his untimely age. He left this world at an early age. It was not an age to go.

Rich Tributes to Ashish. Stay happy wherever you are. You will be missed forever.

Dedicated this 1967 Yr Konark Photo to the Memory of @ashishsarangi Bhai . 🙏 pic.twitter.com/V1JRnm9nkK

I am beyond devastated to hear about the demise of our beloved @ashishsarangi. A stalwart in the field of Odia history and culture, a genuine human being and a loving family man. He was also the man behind @kalingaheritage and has created a void that will be difficult to fill. pic.twitter.com/b5vL5kt61P

Shocking to hear this. We had many discussions about Odisha's heritage. What happened?

Will miss u @ashishsarangi Bhai 😭
Om Shanti 🙏 Great son of Kalinga Bhumi.
You have been my Guru in Knowledge about Kalinga Heritage nTemple Architecture
Will miss ur guiding force.
Thanks for everything.
Our Masaka Group is now half empty🥺@ashishkumar_tw@mishra9Supriya

In 2020, he met me for the first time in Sisir Saras. He would tell me stories of how Sonepur may be Lanka of Ravana..his Ra Ra stories, Biragobindpur Kali temple. All will be missed very much. Still cant believe he is gone so soon.

Have discussed with him on different issues related to heritage, excavation of monuments and promotion of Odia language. We had planned to visit a 7th-8th century temple excavated near our village, but never expected that @ashishsarangi bhaina will leave us so early.

My last interaction with @ashishsarangi bhai.

Devastated to know about the sad demise of @ashishsarangi bhai… He was one person who pushed art & crafts, culture of Odisha. We talked several times over phone when he arranged the walks in BBSR. Wish I could have met him once…
Ashishbhai was too young to go now…

Tragic and shocking. May God give strength to you to bear the untimely loss.

Be it excavations, heritage walks, Konark conservation, saving Sishupalgarh or Odia language and much more, @ashishsarangi’s dedication for the cause of Odisha heritage was immeasurable. Rest in peace, Ashish. You will be missed. 🙏🏽

Woke up to the sad news of the passing of Sh @ashishsarangi. May his whole family and friends find the strength to overcome this loss. Om Shanti. 🙏

Woke up to the sad news & am still unable to process it. I am really heartbroken & can't believe that @ashishsarangi sir left us so soon😓

He was one of the humblest person I know here, and someone wid a passion to explore more abt Odisha’s ancient history

Ashish Bhai was (it hurts not being able to use "is" anymore ☹️) among those few Odias on Twitter who relentlessly make efforts towards uncovering 'best known secrets' of #Odisha @ashishsarangi will be missed. Pic at Bayalisbati from maiden trip of @kalingadiaries #OmShanti 🙏 pic.twitter.com/eTPTPD2qxj

The morning can't be such cruel .. it's not an age to leave of all @ashishsarangi bhai.

Stay happy wherever you are now … Omm Shanti …