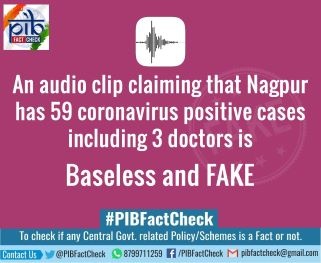 TNI Bureau: An audio clip is being circulated on social media claiming that Nagpur has reported 59 positive coronavirus cases including 3 doctors. The person in the audio also quotes Union Minister Nitin Gadkari to substantiate his claims.

The Press Information Bureau (PIB) Fact Check team has confirmed that the viral audio is fake and baseless. They have urged people not to forward such fake audio clips.

3 people have been arrested in connection with the circulation of the fake audio clip on social media, confirms Nagpur Police Commissioner BK Upadhyay.

BMC issues List of Stores for Home Delivery in Bhubaneswar