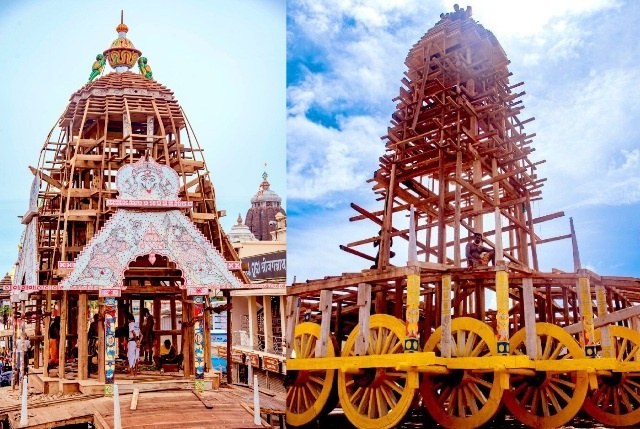 TNI Bureau: Following the ruling of the Supreme Court, which stopped the annual Ratha Jatra of Lord Jagannath this year in view of Corona Pandemic and the Odisha Government decided to comply with the order, The News Insight had conducted a debate on Facebook. We have listed the views of 38 respondents.

Our Question: What’s your take on Supreme Court’s decision to stop Ratha Jatra this year due to Corona Pandemic & Odisha Govt’s decision to comply with the order?

👉 Navin Das: Gof Odisha proposes and SC endorses. So, judgement was expected on govt line. Could Mukul Rohatgi be engaged by this “chhadakchhap” petitioner ?

👉 Bijoy Rout: When the Odisha Government is not interested to shoulder the responsibility, it it unnecessary to poke our nose into the controversy between law and lives of general public!

👉 Suresh Dash: Supreme court has undoubtedly encroached the powers of the Executive in stopping the Ratha Jatra.

👉 Chetan Agrawal: Supreme Court’s decision is good. Good for all.

👉 Dilip Rout: Let us carry our idols in 3 trucks to Gundicha Temple for rituals.

👉 Laxmidhar Ojha: Ratha Jatra is not going to happen this year by the decision of Supreme Court of India. Lord Jagannath does not want it; so it happened through Supreme Court. God bless us.

👉 Suman Kumar Panda: “Kari karau thae muhi, mo bina anya gati nahi”. No matter how strongly we believe that the decision came through SC, but it is the Mahaprabhu who wished for a ‘snana purnima’ and he who wanted the chariot to be stopped from being pulled by devotees. We should respect the Lord’s decision.

👉 Sambit Nanda: Govt can handle lakhs of returning migrant workers, can accumulate thousands of people for reciting of state anthem on Puri Grand Road. But when it comes to safeguarding religious sentiments, this govt played treachery.

👉 Pradeep Kumar Panda: Absolutely right decision. Even Lord Jagannath does not want Ratha Jatra for the sake of safety of millions of devotees. It is his Almighty’s wish. We should respect the Supreme Court decision.

👉 Srinibash Samal: If they had said with conviction right from the beginning, I would have had no problem either way. But this kind of evading decision for months, engaging hundreds of people, then doing a last-minute turnaround is can’t be acceptable.

Months of efforts of hundreds of artisans became useless. This is an emotional issue, stopping it after so much delay is not fair. Government should have found a way out to hold the festival. In my opinion, this year it would have been better if the Ratha Jatra had been with out pomp with limited people and symbolic just to protect the practice!

👉 Simanchala Mishra: Disgusting! It hurt the sentiments of crores of Odias. Harish Salve is no mean an Advocate to lose such a case. The Cabinet decision is just complimentary to the argument of Salve. The Govt should have made it clear well in advance. The Apex court can’t be blamed since the possibility of huge gathering was pleaded. When the disciplined Odias were prepared to watch from home and when it was pre decided to conduct the festival with the Sevayats and police, there was absolutely no necessity to ban the holy festival and break our hearts.

“Oh, God forgive them, they don’t know what they are doing, forgive us too, we are law abiding Odias. We have put up with Kalapahad in the past and helplessly bear with the present establishment too.

👉 Umasankar Sahu: I can’t control my tears today 😢. Our Govt. should go for a review petition and pray Hon’ble Supreme Court in favour of Lord Jagannath Ratha Jatra with implementation of all restrictions over gatherings this year. It’s not a small issue, it’s connected with Multi Crores of Hindus throughout the World. I still request out State Govt. Please shutdown all the liquor shops spread everywhere here in our state and take positive steps in favour of Holy Ratha Jatra this year. 🙏

👉 EduCare Nabarangpur: Looking at the pandemic and how it is affecting the people across world, the people of Odisha and all the Jagannath devotees should voluntarily stop Ratha Jatra. Lord Jagannath knows everything and as a devotee I believe he is more supreme than honorable supreme court. I am equally disappointed with no Ratha Jatra this year.

Second, if we analyse this year’s entire Ratha Jatra process from the beginning till date, it will be clearly understood that uncertainty has been created from the very beginning, which is sad and painful.

👉 Sibasankar Dasmahapatra: Both Government given pass to each other. When Ball was very close to goal post, final kick given by SC. And it’s a Goal.

👉 Ajit Dash: Odisha Government played it well. From the very first day, the Government was not in favour of Ratha Jatra.

👉 Anirudha Nayak: I am looking for that person who said Mahaprabhu Jagannath told him in his dream that Tulsi leaves would save from Corona. Why he failed to get any direction from Lord Jagannath on Ratha Jatra?

👉 Satya Ranjan Swain: There is no problem celebrating Ramzan; no problem with Nala Road gathering, No problem with Bande Utkal Janani celebration. So many gatherings are happening across country. But problem is with Ratha Jatra. By maintaining social distance, Ratha Jatra can be performed with the help of police and Sevayats. SC decision is just an excuse. People of Odisha will never forgive. Both State government and BJP are responsible for this.

👉 Laxminarayan Kanungo: Odisha government had engaged lawyer Harish Salve, who didn’t plead for a limited ritual while only Central government lawyer Tushar Mehta, Solicitor General pleaded for it before SC.
The Rath Jatra could have been stopped from the beginning, but it hurts when it is going to be stopped just before 3 days of car festival.

👉 Biswwaraj Nayak: It was a pre-planned conspiracy by the state government to hold the celebration. Govt had many alternatives and the Ratha Jatra could have been celebrated with precautions and restrictions. Had the govt prepared its plan meticulously, it could have convinced the apex court. Cabinet’s decision to abide by supreme court’s decision is nothing but escapism. It’s painful that we don’t see a public outrage against such an unfortunate decision. The silence of BJP & Congress leaders is more baffling. Odias should outright reject leaders who don’t fight for the identity & pride of Odisha. If thousands of people can gather to sing State Anthem, then why can’t we celebrate the festival ?

👉 Dr. Rashmiranjan Sahoo: We are angry not coz #RathaJatra was stayed in the last minute… We are angry the way govt back-stabbed Odia people. They could have stopped everything from beginning … But they allowed all the rituals before pulling their leg in last moment. #WeWantRathaJatra

👉 Ramnaresh Mishra: Now a days to play with Hindus and their religious sentiments became a cause of entertainment for all liberals. For politician to supreme court all are trying this new measurement unit, measurement of secularism or liberalism. Higher the degree of Hindu harassment, higher will be your secularism and liberalism proved.

👉 Satyapriya Satapathy: Mahaprabhu Jagannath is the Lord of the Devotees. He has taken the decision to save his devotees from this pandemic. He decided to stay inside the Srimandir to secure his devotees only. It’s all his wish. He is not bound by any rules or law. Jai Jagannath. 🙏

👉 Murthy Kvln: Supreme Court has no right to stop the Ratha Jatra.

👉 Devendra Adhikari: We, the Odias forget everything when we get deeply involved in devotion for Lord Jagannath. It’s very obvious that rules and guidelines will go for a toss during Ratha Jatra. We have witnessed it during the ‘Bande Utkala Janani’ event how the social distancing norms and other COVID-19 guidelines were not properly followed. If something like this happens during Ratha Jatra, the Odia Community will be maligned like the Tablighi Jamaat members.

I think this is a message from the Lord himself via Supreme Court. He wants to safeguard his devotees. We love him and he loves us too. Let’s abide by this order at least once (this year). I support the decision. 🙏

👉 Abhin Adhikari: Supreme Court must not interfere in religious beliefs until and unless it violates someone’s human rights. Exactly I don’t know whether SC asked for alternatives or not and what was the answer of State government on this inside the court. Seems like a pre-planned KALA PAHADA technique to destroy our culture. The State government must clarify it stand.

👉 Souranshu Prasad Sahoo: If Deva Snan Purnima rituals can be performed with limited sevayats, then Ratha Jatra rituals can also be performed with limited Sevayats and Police personnel. Ratha can be pulled by Sevayats and Police personnel. Live telecast for the devotees, section 144 can be imposed on surrounding places of Bada danda…

Public health should be in the first priority. But without compromising the public health issue, if administration is capable to conduct the Car Festival ( proved in the Sanana Jatra) then tradition should not be broken. It should be noted that due to the unwilling approach of Odisha government to conduct Ratha Jatra this year, the apex court delivered this judgement.

👉 Tusarkanta Satapathy: It’s his wish. He has control over everything and we are mere players. Even any discussion about him, is disregard to him.

👉 Pranab K. Pani: Unfortunate, but considering the Pandemic, it’s absolutely sensible and judicious decision which we all must respect and obey without allowing our emotions and religious sentiments overpower logic and reasoning. Jai Jagannath 🙏

👉 Prasanta Dash: Presentation of the facts before the Supreme Court was wrong.

👉 Soubhagya Ranjan Mohanty: Ratha Jatra is purely a sacred custom; no doubt that the sentiments of devotees may have been affected. There will always be a hue and cry, but last but not the least the apex court order is a time bound decision overriding tears.

👉 Sibasis Mohanty: I am completely with supreme court decision, favouring Ratha Jatra would have been a monumental blunder…Life of individuals is important. There is a crisis world wide. Let’s respect Humanity.