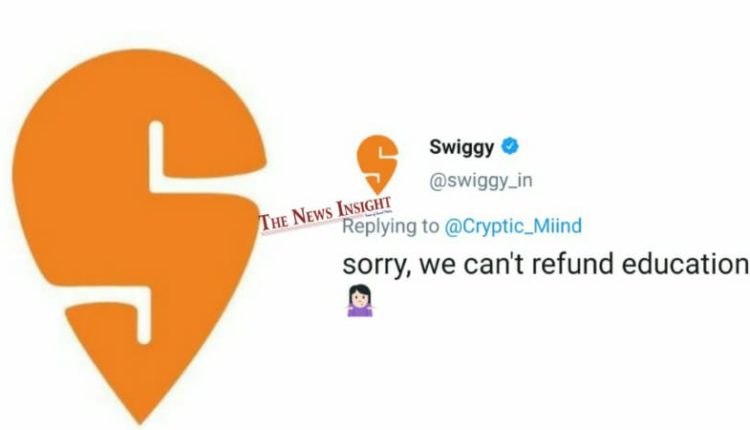 The Farmers’ Protest is not only intensifying at the Delhi-Haryana border but the tension is now escalating on Twitter too. Social Media is a platform that allows its users to share their views and opinions easily with other users. And, people are indeed using it to express themselves in various situations.

For an instance, farmers are protesting against Central Government over the new Farm Bills. On the other side, Social Media Users have initiated a Twitter War yet again due to their different approach towards the current scenario of Farmers Protest.

For several days now, Farmers Protest has become a big political and social issue. Some are being sympathetic towards farmers and others are supporting the government over the Farm Bills. Now it looks like, Swiggy has entered the debate with their smart reply to a tweet in support of Farmers creating a huge mess on Social Media.

The food delivery app recently replied to a tweet stating a joke in support of Farmers. The tweet stated that “Had an argument with my Bhakt friend over farmers protest. He said that we are not dependent on farmers for food. We can always order food from Swiggy. He won.”

To this comment, Swiggy replied with a short satirical response “Sorry, we can’t refund education”. With this tweet, Swiggy just didn’t enter into a debate, but also became a topic itself.

While some users backed the food delivery app for supporting the farmers, others slammed this move by the company. Within no time, Boycott Swiggy Trend topped the Trend List facing the backlash of supporters of Farm Bills.

One Twitter user wrote that this tweet represents the organization as a whole and called it an attempt to take a partisan stance over Farm Bills without even understanding it. Many users even shared screenshots of Uninstalling the Application. Though there are some users who also came out in support of the App. Some people even appreciated them for the savage reply.

Undoubtedly, this one reply by the official Twitter handle of Swiggy can have some serious implications on the operations of the Company in the future.

Earlier this month, a similar kind of controversy happened over the tweet by another food delivery app Zomato. Twitter users called out for boycotting Zomato over its reply to actress Swara Bhaskar’s tweet on Arnab Goswami. The supporter of the journalist called for the boycott of the app.