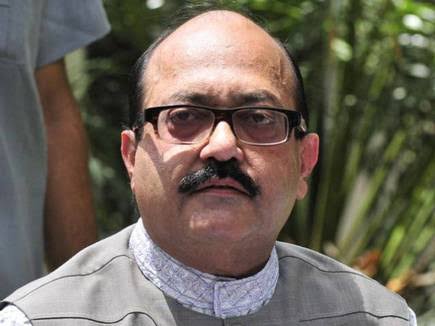 TNI Bureau: Known as the ‘Real Chanakya’ of Indian Politics, who ruled the roost in 2006-10, has finally bid adieu to this world. Senior Politician and Rajya Sabha MP Amar Singh passed away at the age of 64 while undergoing treatment in Singapore.

An era comes to an end with his demise. Amar Singh will be remembered for bailing out the UPA Government single-handedly after the Left parties withdrew support in 2008 over Indo-US nuclear deal. He not only convinced Mulayam Singh Yadav to secure support of 39 Samajwadi Party MPs, but also brokered “deals” with various other political parties and MPs to ensure survival of Manmohan Singh Government.

The Politician from Azamgarh had controlled the Uttar Pradesh politics for several years before falling out with Mulayam Singh Yadav. He was sacked in 2010, leading to his fall. He floated a new party, but failed to make any impact. He also joined Ajit Singh’s Rashtirya Lok Dal (RLD), but did not stay there for long.

Amar Singh later retired from politics, but returned to become a Rajya Sabha MP in 2016 with the support of the same Samwajwadi Party. He was also reinstated as one of the general secretaries of the party in October 2016.

Amar Singh had friends in all political parties. He had excellent rapport with power centres of Lutyen’s Delhi irrespective of their political or ideological affiliation.

Amar Singh had great bonding with the family of Amitabh Bachchan, but later fell out with Big B and spoke against them. He held Amitabh and his wife Jaya Bachchan responsible for his ouster from Samajwadi Party in 2010.

On February 18, 2020, he tendered an emotional apology to the Bachchans from the hospital bed.

“Today is my father’s death anniversary & I got a message for the same from @SrBachchan ji. At this stage of life when I am fighting a battle of life & death I regret for my over reaction against Amit ji & family. God bless them all,” he had tweeted.

On March 2 2020, he had posted another video message to end rumours that claimed that he was dead. “Tiger Zinda Hai,” he had written in his short video message.

Amar Singh had suffered kidney failure in Dubai way back in 2013. He never recovered from that disease. He was being treated in Singapore for several months and finally breathed his last at a hospital there. His mortal remains would be brought to India soon.