The partial solar eclipse was visible in the region covering Europe, the Middle East, North-eastern parts of Africa, western Asia, the North Atlantic Ocean and the North Indian Ocean. 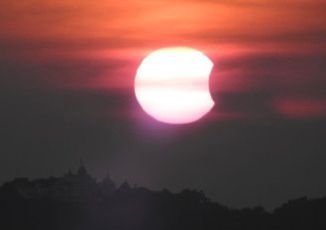 The partial #solareclipse that i recorded from rooftop at home #Bhubaneswar today 25.10.2022
In the 1st video you can see the eclipse as the 🌞 sets over the #Khandagiri hilltop 🥰#nature #positivevibes #HindolHouse #Bhubaneswar@BSCL_BBSR @vbanno @SharmaJyots @shaillion @nsbchd pic.twitter.com/KKh0Fmxd6u

Notably, a Twitterati has captured the video from his terrace roof in Bhubaneswar. The sun is seen setting over the Khandagiri hills with the eclipse covering the sun partially.

The video is getting viral on Twitter and users are getting all jaw dropped watching the phenomenon.