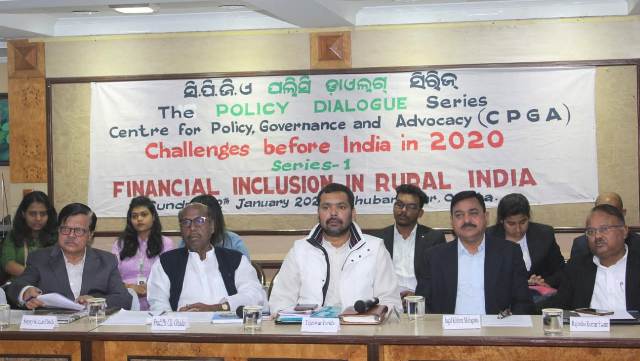 TNI Bureau:  Financial Inclusion which is key to poverty alleviation cannot be achieved without a serious and radical transformation in financial inclusion policy and result oriented partnership between the Government, industry, civil society and financial institutions, experts argued at the Centre for Policy, Governance and Advocacy (CPGA) organised policy dialogue on Financial Inclusion at the CYSD Convention Centre in Bhubaneswar.

Chairman of CPGA, Tejeswar Parida welcomed the guest and introduced the theme to the participants. Chief Guest Prafulla Ghadai, the former Finance Minister, Govt of Odisha shared his dream of a poverty free India and poverty free Odisha. He was concerned that financial literacy is not reaching to everyone and many are excluded in accessing financial support also. Citing the plight of the slum dwellers, Ghadai advocated change of mindset of policy makers, bureaucrats, bankers and common people towards a more compassionate approach to the less privileged. 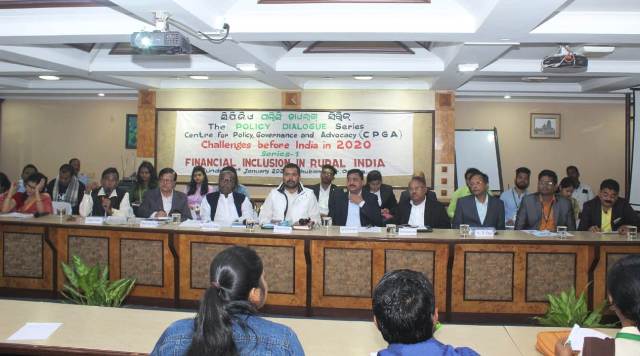 Guest of Honour Dr. Jugal Kishore Mohapatra former Chief Secretary Government of Odisha drawing from his wide and four decades of experience in governance and financial management, he stressed that financial inclusion is pre-requisite to achieve livelihood security in the rural areas. To achieve higher financial inclusion, he advised to bring innovation at three levels; customized products, institutions and the enabling system.

Guest of Honour, Dr. Sanjay Kumar Panda (retd. IAS) former Chief Secretary of Government of Tripura, argued that financial inclusion is key to achieve economic justice which is an objective enshrined in the preamble of the constitution. He highlighted three essential requirements for better financial inclusion, such as

He shared his experience of working on financial inclusion while he was the Chief Secretary of Tripura. He has published a book entitled “One plus One Equals Eleven” on this transformational experience. Guest of Honour, Senior Journalist Nageswar Pattnayak expressed his concern on the declining number of bank branches in rural India which has gone down to 3948 in 2018 from 8948 in 2015. He also added that nearly half of the bank accounts opened in India were not in operation during the last financial year as against 25% at the global level. 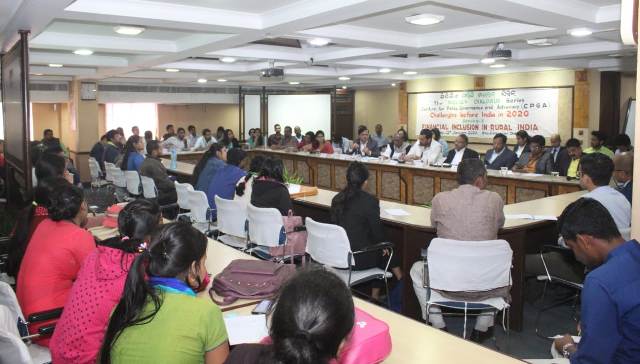 Guest of Honour, Rajendra Kumar Swain, CMD of Canara Bank shared the timeline of the poverty alleviation initiatives to provide a historical background of the initiatives of financial inclusion. He mentioned that the financial inclusion initiatives and the operations of MFIs started since 2005. He cited facts of rural urban divide on financial inclusion especially in unbanked areas, i.e. 4253 out of 6798 GPs are unbanked in Odisha. Finally he highlighted some of the important challenges which include low financial literacy, lack of formal identification documents, lack of consumer protection, rural poor and gender inequality, use of the transaction accounts.