Outage over burning of Hindu Temple in Khyber Pakhtunkhwa, Pakistan 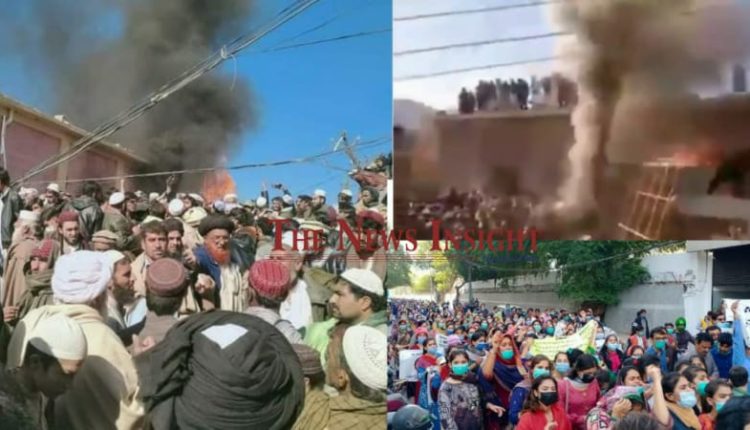 TNI Bureau: Recently in a Tragic incident that took place in Pakistan, a Hindu shrine got destroyed and was set on fire by a mob led by the local clerics. The vandalised temple was a samadhi of popular Hindu Saint Shri Paramhans Ji Maharaj situated in Teri Village of Karak District. Another temple Krishna Dwara Mandir also got vandalised by the mob for allegedly using extra land while reconstructing the Temple.

Local Police also confirmed the incident took place on Wednesday. This is not the first time the temple was attacked and vandalised. The same temple was earlier attacked and demolished in the year 1997. Now after years, the temple was again being reconstructed after the Supreme Court of Pakistan passed an order in 2015.

According to the Pakistan Police, this incident was the outcome of a misunderstanding over the land allotted to the temple for reconstruction. The destruction caused to the temple has caused an outage in Pakistan. Hindu Women in Pakistan are out on the roads protesting against the attack. Human Rights Minister of Pakistan Shireen Mazari also tweeted condemning the act.

Ramesh Vankwani, Member of the National Assembly of Pakistan and Patron-in-chief of Pakistan Hindu Assembly also condemned the act strongly and have called on the Chief Justice of Pakistan regarding the concerning incident.

The Chief Justice of Pakistan, Gulzar Ahmed has taken cognizance of the matter. He has now ordered the Chief Secretary and IGP Khyber Pakhtunkhwa to visit the site where the burning of Hindu Temple took place and submit the report about the same on Jan 4, 2021.

The case will be presented before the Supreme Court of Pakistan on Jan 5, 2021, a day after the report submission.