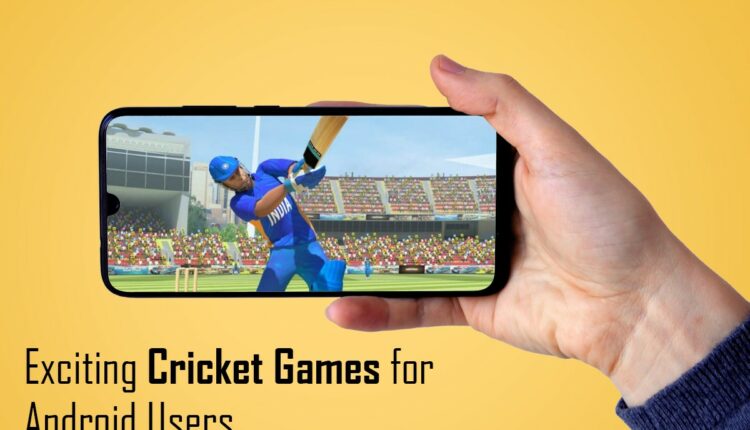 Cricket is the second most popular game globally and the most popular game in India. It has gained popularity due to its viewership and adaptation by the local audience over the past few years. Cricket enthusiasts always want more than just witnessing the game. Therefore, game developers have launched hundreds of mobile cricket games on the Google Play Store for hardcore cricket fans to enjoy playing the game and experience a real-life competition by connecting with players globally over a gaming app and playing different contests and tournaments to win exciting prizes.

To enjoy the action-packed game of cricket, app developers, in association with game developers, have introduced cricket over OTT platforms, introduced fantasy cricket for hardcore cricket fans, and launched a handful of online cricket games. Cricket matches are played widely from small gully to big stadiums and are a fun outdoor game. However, hardcore cricket fans thank the game developers for launching a few of the best online games that deliver an authentic cricket experience.

According to the International Cricket Council, cricket is approximately played in over 100 countries. An estimation report from the cricket council proves that the game has more than 1 billion fans, with both young and adult cricket lovers. Hence, the growth of cricket can potentially show an upward trend in the upcoming years. Thanks to the gaming developers for launching free android cricket games over Google Play Store. A few of the best games to play online and learn more about cricket are listed below.

According to the statistical record of the game, it has more than 1 million downloads on Google Play Store, making itself the favorite game among cricket enthusiasts. The game has an eye-catching rating over the Play Store app, which is enough to prove that quite a number enjoy the game. The game’s authenticity is top-notch as it provides all the 8 original IPL teams. Apart from regular length matches, there are a few other gaming modes, such as the super over target and the super over chase, which are quick games. Users can play these short-length matches with opponents to earn free rewards.

The size of the game generally is 42 MB, which once again proves to be user-friendly as the minimum storage of any Android phone is 2 GB. The game’s graphics are lighter and with lesser contrast due to the game size. A minimum Android version of 4.4 is required to download the game from Play Store.

Apart from other games, fans consider and rate the different versions of the World Cricket Championship(WCC) as the most popular online cricket games among other digital games. The game consists of 18 international teams, 10 domestic teams, and 42 venues for hosting matches. The WCC2 is one of the best online games for hardcore cricket fans as it takes the game of cricket to the next level by adding realistic features such as famous cricketing shots, namely the Dil-scoop, the Upper Cut, and the Helicopter Shot, and the realistic ball feature. This game is known for its versatility, brings out fun among players, and enables them to win exciting prizes after winning tournaments and contests.

The 3D graphic of the game allows the player to experience real-time game situations and make decisions accordingly. The game brings out several catchy features such as multiple angles of the camera, bright animations, hot exciting events, and new controls with the launch of a new version of the game.

The Big Bash Cricket originated and was considered Australia’s premier T20 event. It is considered a unique cricket game compared to other online cricket games because of the introduction of the LED bail feature. Other cricket matches and the matches played at the stadiums of Big Bash Cricket consist of a different atmosphere. The official Big Bash League, along with its authentic adaptation as a game, has won the hearts of many cricket fans.

The original size of the game is 59 MB, and android users with a version of 4.1 and above can install the game through Google Play Store. The in-app purchases of the game make it more interesting, but apart from that, the free version of the game is also exciting and loved by cricket fans. Fans can play WBBL and BBL to gain a great cricket experience.

The gaming franchise has three game versions: Stick Cricket Premier League, Stick Cricket, and Stick Cricket 2. The versions mentioned above focus on teams, whereas the Stick Cricket Super League focuses on an individual player created by the user. The interesting feature of creating a player instills excitement and curiosity among users as they can play various tournaments by joining different teams.

The exceptional Fast Tracking feature of the game allows the user to negotiate with the opponent during the time of recruitment if they have no time to complete the match. The game has a 4.3-star rating out of 5, available on the Google Play Store with a game size of 39 MB. Also, Android users with Android 5.1 and above can download the game.

These were a few of the best games listed above with their unique gaming interface. By playing online games, one can boost the mind’s competitive ability, which in turn enhances memory responsiveness. Collaboration with friends and family over a social platform who live far apart can be the best way to connect and spend time together over a virtual platform. Most importantly, playing online games enables hardcore fans to participate in different gaming contests, providing exciting prizes for winners.

Did You Know – The KarniMata Temple in Rajasthan?